The Nuclear fuel cycle is the series of industrial processes that describe uranium throughout its life cycle; from mining to processing to generating electricity and finally to its reprocessing and waste.[1] Essentially all activities involved with nuclear power from its beginning to end are considered to be part of the nuclear fuel cycle.

The cycle is split into two parts; the front end and the back end. Front end includes mining, milling, processing, enrichment, and nuclear fuel fabrication. The back end includes the primary goal of the fuel cycle, the generation of electricity, along with temporary storage, reprocessing, recycling, and wastes. 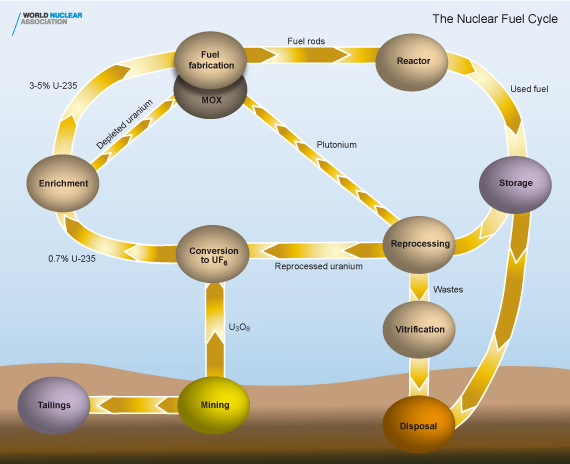 Each section will discuss in brief detail the workings of the uranium nuclear fuel cycle. For more information visit the main article for each, provided below each section title.

Uranium is found relatively commonly in the Earth's crust, it is about 500 times more abundant than gold and about the same abundance as tin.[1] Many countries have uranium mines, however Canada, Kazakhstan and Australia are the largest producers of uranium. There are many techniques to mine the ore, with underground mining being the most common due to the depths of most mines. In depth videos of these techniques can be seen on the uranium mining page.

Mined uranium ore cannot be used directly to power a nuclear reactor; it needs to be processed and enriched in order to be used for energy. The ore is first brought to a mill where it is converted into U3O8, an isolated form of uranium referred to as "yellowcake". Most power plants cannot use the fuel in this form yet, since the content of the fissile isotope of 235U is only about 0.7%.[1] The CANDU reactor can use the fuel at these concentrations however.

To enrich uranium, the goal is to increase the concentration of 235U in a sample, generally between 3-5%.[1][3] The main process used to accomplish this is by use of centrifuges, which spin extremely fast in order to separate the isotopes from one another, allowing the 235U to be accessible. Read more about enrichment processes on the main article.

In order to be used in a power plant, the fuel must be fabricated into pellets. These are formed from pressed UO2 and baked in a 1400oC oven. These pellets are then packed into fuel rods, which are formed into an assembly for use in a nuclear reactor, seen in Figure 2.

Several hundred fuel assemblies such as those in Figure 2 are needed for a nuclear reactor, with a 1000 MWe reactor using around 75 tonnes of enriched uranium fuel.[1]

The production of power is done very similarly to a coal-fired power plant, however the type of fuel and methods of obtaining heat differ drastically. When slow-moving neutrons are absorbed by 235U, the atom splits, causing a nuclear chain reaction. This produces tremendous heat, and this heat can be absorbed by water. The water phase changes to steam, which can then be used to spin a turbine and generate electricity.

Some of the 238U also gets used for power generation, however it needs to be converted to plutonium first. This happens naturally in a reactor, as the 238U absorbs a neutron, then beta minus decays twice up to 239Pu.[4] The plutonium then decays through the 235U decay chain, and accounts for about 1/3 of the power output of the plant.[1]

Typically 44 TWh are produced per tonne of natural uranium. In comparison, 20 000 tonnes of coal or 8.5 million cubic meters of gas would be needed to match this.[1][3]

Figure 3. A boiling water nuclear reactor, which is an external combustion engine.[5]

After time, the amount of usable fuel in the reactor will diminish due to heavy elements and other fission products being produced. After 18-36 months the fuel is removed from the reactor, however there is still potential for energy contained in it, with the amount depending on the type of reactor. This fuel is very hot and radioactive, so it is stored temporarily in a storage pool of water, which cools it and absorbs the radiation.

The fuel can then be reprocessed since it still has slightly more 235U than found in nature (if the fuel comes from a light water reactor, a BWR or PWR). The plutonium can be made into a mixed oxide (MOX) fuel, in which uranium oxide is combined with plutonium oxide.[1] This is done by dissolving the fuel rods in a solution in order to obtain the separate materials.

The unusable waste produced throughout the nuclear fuel cycle, including low-level waste from all stages of the cycle, intermediate waste from the reactor, and high-level waste separated in the reprocessing.[1] The waste can be incorporated into a solid material, with a year's waste from a 1000 MWe reactor producing about 5 tonnes.[1]

At the present time there are no disposal facilities for this material, only storage facilities. This is because there is no immediate need to rid of it since it doesn't occupy much space, and also because it could still potentially be reprocessed at a later date.[1]