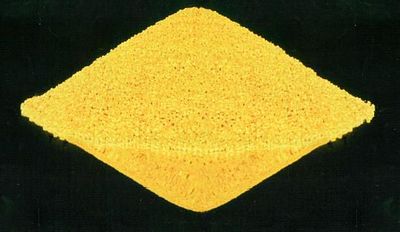 Figure 1. A pile of yellowcake uranium powder, U3O8. Yellowcake is traditionally stored as a powder.[1]

Yellowcake uranium the powdered typically yellow form of uranium oxide with the chemical formula U3O8. In the nuclear fuel cycle, yellowcake is a product of the second step, occuring directly after mining and is created through milling. After the uranium is mined, the ore that is obtained has many different complex uranium oxides within it. The ore is therefore reduced (milling process) to one specific oxide, U3O8, in order to be converted into uranium hexafluoride, UF6, which is the third step in the nuclear fuel cycle.[2]

Despite its name, yellowcake can vary in proportion and color from yellow to orange to dark green (blackish) depending on the temperature at which the material is dried (this affects the level of hydration and impurities), with higher drying temperatures producing a darker and less soluble material.[3]

Older milling methods were done by mining the ore and then sending it through the mill where it was crushed and then ground in water which produced a slurry of fine ore particles suspended in the water.[4] After which the slurry was leached with sulphuric acid in order to dissolve the uranium oxides. What was left was the remaining rock and other minerals which do not dissolve in the acid, these are the tailings.[4]

However these methods are no longer commonly used, rather a method known as in situ leaching is utilized. This means that the mining is accomplished without any major ground disturbance. Groundwater with a lot of oxygen injected into it is circulated through the uranium ore, extracting the uranium. The solution with dissolved uranium is pumped to the surface.[4]

The uranium oxide is only mildly radioactive. The radiation level one metre from a drum of freshly-processed uranium oxide about half the radiation experienced from cosmic rays on a commercial jet flight.[4] Because the yellowcake is just the separation of the uranium from the ore, it displays no more radiation than naturally occurring uranium. Due to natural uranium consisting of approximately 99.289% 238U, which has a half-life of roughly 4 billion years, its radioactivity is very low. The shorter the half-life, the more radioactive a substance is and vice-versa.