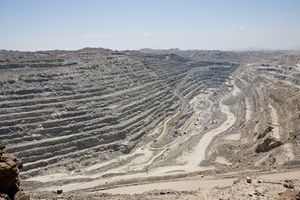 Uranium mining is the process of retrieving uranium from deposits for use in nuclear reactors to generate electricity. Uranium is also used for the important task of producing medical isotopes.[2]

Uranium is not a rare element on Earth, occurring in 2.8 parts per million in the Earth's crust, and occurs in fairly large quantities in various geological settings. Uranium mines operate in 20 countries, however 85% of the world supply of uranium came from just six countries in 2011. These countries are Canada, Australia, Kazakhstan, Russia, Niger, and Namibia.[2] In the world's mines, the average abundance of uranium is 0.10%, or 1000 parts per million. However in Canada, some mines have huge amounts of ore that have an average grade of up to 20% U.[2]

Canada is the second largest producer of uranium after Kazakhstan, producing 15% of the worlds uranium in 2012. Around 85% of Canada's uranium is exported, with the remainder used in CANDU reactors in eastern Canada.[3]

In general, uranium mining is relatively similar to other kinds of mining unless the ore is very high grade. In this case, special mining techniques are used to limit worker radiation exposure and to ensure the safety of the environment and general public.[2] Depending on the deposit, uranium is mined in one of three ways:[4] open pit, underground, or in situ recovery.

When uranium is found near the surface - usually no more than 100 meters deep - it can be extracted via open pit mining. In this method, soil and waste rock is removed by heavy equipment, allowing the ore to be accessed. The mines are carved out into sections called benches so that they can be mined methodically and safely.[4] Holes are drilled into the benches and loaded with explosives; they detonate, breaking up the rock and exposing the uranium. The uranium is then loaded onto trucks and shipped to a processing plant.

For mines more than 100 m below the surface, it is impractical to use open pits. If the quality and amount of uranium is sufficient, underground mines will be established.The first step is to dig large vertical underground shafts to the depths of the ore. Once this is done, horizontal tunnels, ramps, and chambers are built, allowing for the mining of uranium. There are different techniques to obtain the uranium at this point.

The raisebore mining method is used at the McArthur river mine in northern Saskatchewan, Canada, which is the largest producer of uranium in the world. This method uses a revolving tool which digs into the uranium deposit, and breaks up the uranium which falls into a truck below. Click here to see how the raise bore method works.

Another method is jet bore mining, which uses pressurized water to remove ore, which can then be process and pumped to the surface. Click here to see how this method works.

Figure 2. McArthur river underground mine in Canada, the world's largest producer of uranium.[5]

In this method, the ore is fairly deep underground so it cannot be mined with open pits, and there may be other factors which make it more practical than other underground mining methods. A reason for its use is that it leaves very little environmental disturbance at the ground surface level.[4] Dissolving solutions are pumped to the uranium underground which allows the uranium to flow through a system of wells to the ground above where it can be processed. Click here to see how the in situ recovery process for uranium works.