Rocks have unique porosity and permeability characteristics. This means that water does not move around the same way in all rocks below ground.[1] There is not a direct relationship between rocks that can contain water and the depth at which they are located.[1] For example, granite, due to its high density will yield almost no water to a well, even if it is relatively close to the surface. However, sandstone in contrast, which is a porous rock, may lie extremely deep in the ground and can contain water at the rate of hundreds of litres per minute.[1] Rocks that contain freshwater have been found at depths of more than 1829 m, and salty water has come from oil wells at depths of more than 9144 m.[1] On the average, the porosity and permeability of rocks decrease as their depth increases. This is because the pores and cracks in rocks at deep in the ground are sealed or reduced in pore size because of the weight of overlying rocks above.[1] 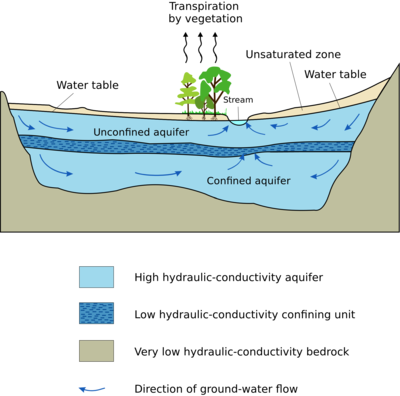 When wells are drilled for water, they go through several different types of zones. Initially when a well is drilled, it first passes through a zone called the unsaturated zone or also called the vadose zone. This is where the openings in the sediment, soil or rock are mostly filled with air.[3] Water is present here only in a downward movement. The thickness of this zone depends on many factors such as climate, elevation, and the season of the year.[3] Due to gravity, the water just keeps moving downward, underneath the Earth’s surface, until it can’t go any farther. When the water hits a layer of rock or earth it can’t get through, it just sits there and builds up. This contained water underneath the surface is called an aquifer. Drilling further down will reach the saturated zone. This is where all the of openings are filled with water. The water here is known as groundwater. If the saturated zone is permeable enough to supply adequate water to a well, the saturated zone is called an aquifer.[1] The top of the saturated zone is called either the water table if the aquifer is unconfined or the potentiometric surface if the aquifer is confined.[1] If groundwater in an aquifer is trapped between layers of impermeable rock, like shale or clay, it can be enclosed under high pressure. If the aquifer is tapped by a well, due to the pressure, the water can rise above the water table and flow out from the well onto the ground surface. Water confined by this technique is called an artesian aquifer.[1] Aquifers act as natural filters that trap sediment and other particles such as bacteria. They provide naturally purified ground water flowing through them.[4] In certain permeable materials, groundwater can move several metres in a day or in other areas only a few centimeters in a century.[1] Clay particles and other mineral surfaces in an aquifer also can trap dissolved substances or slow them down so they don't move as fast as water percolating through the aquifer.[4] Natural filtration in soils is quite important in recharge areas and in irrigated areas above unconfined aquifers, where water applied at the surface can travel downwards through the soil to the water table.[4]