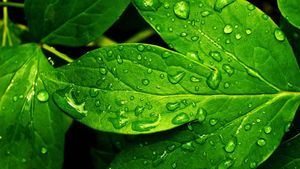 Figure 1: Beads of water on a leaf, however not transpiration as that is an invisible process.[1]

Transpiration is the process in which plant roots absorb water and then release the water in the form of vapour through the leaves. Transpiration is an important factor in the water cycle as it is one of the major sources of water into the atmosphere. Providing 10% of the total water in the atmosphere, this process is nearly identical to perspiration or sweating in animals. When the roots take in water from the topsoil layer, the water is then converted into vapour and is essentially evaporating off the surface of the leaves.[2][3]

Plant cells have pores called ‘stomata’ which play part in how much water gets released from the leaves. The stomata open for two reasons; to absorb carbon dioxide (CO2) from the atmosphere and to take in sunlight, this encourages photosynthesis. Stomata close in events such as drought to prevent the loss of water and eventual death of the plant.[4]

The rate at which transpiration occurs is varied based on temperature, air movement such as wind, how much moisture is in the soil and surrounding air, the type of plant and land use.[2][3]

Figure 2: In areas where the water table is closer to the surface such as near large bodies of water or on angled terrain, plant roots can access the area beneath the water table, this creates an easier environment for plants to acquire water to aid with transpiration.[2]