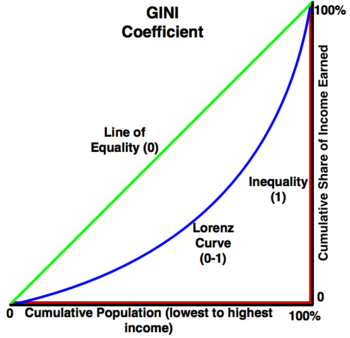 Complete inequality means that the group with the highest incomes earns the whole of the share of income earned, one group has all the money. Complete equality means that there is an equal distribution among income levels and the amount of the total income that each group possess. The graph in figure 1 shows what perfect equality and perfect inequality look like. Real countries have a curve (called a Lorenz curve) that is somewhere between the two. The more the Lorenz curve sags, the worse the inequality is within a country.[2]

Note: The Gini coefficient falls between 0 and 1, when indexed, the number is converted to fall between 0 and 100 and should be thought of as a percentage.

GINI Around the World

The map below shows the Gini Index (0-100) number of each country.

Note: There are data missing for some countries.[3] Hover a mouse over a country to get it's Gini Index.

Notice that OECD or "western" countries such as the United States do not always have the best Gini coefficient despite their relative wealth.