A mine mouth electric plant is a coal burning electricity generating plant that is built close to a coal mine.[1] In these plants, coal is excavated from the dig site, placed on a conveyor belt, and run directly into the plant where the coal will be burned.[2] In western Canada, the main coal mines include Boundary Dam, Paintearth, Poplar River, Highvale, and Sheerness mines—which are all mine mouth operations. Combined, these mines account for approximately 60% of the electricity generated in Alberta and Saskatchewan.[3]

Mine-mouth coal plants have become more common in recent years as there have been improvements in long-distance electricity transmission, making it more viable to have a power plant near a mine but perhaps further away from the point where the electricity needs to get to. In addition to reducing transportation costs, power plants and mining operations can enter these agreements to ensure the security of coal supply for the plant. This is because the plant has made specific agreements with the mine to obtain reliable amounts of coal—along with reduced transaction costs.[4] This type of mining is used widely for lignite coal, mainly because power plants have boilers that are prepared for specific types of lignite coal only available from a nearby mine—and a constant and secure supply of this coal is vital for the plant to continue operating. Additionally, lignite transportation costs are comparatively high, so remaining close to the mine is vital for profit.[4]

Although the use of these conveniently located power plants might seem beneficial, there are also drawbacks. Many coal-rich western areas are also water-poor, and coal plants can use large amounts of water for cooling and steam production. This can potentially be a major use of water, and may pose environmental issues.

The map below shows an example of a mine mouth operation: the Genesee coal mine and Genesee coal fired power plant. Note that the gray area has been stripped of all plant life (strip-mined) and is many kilometers across. The green area is where the mining company has replanted vegetation to green field the operation. 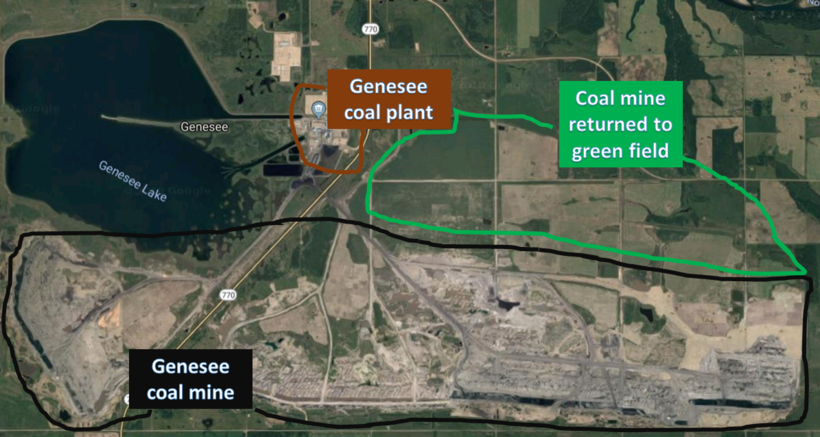 Figure 1. The Genesee Coal fired power plant is right next to a coal mine that has been operating for decades. Some portion of the strip-mined area has been returned to a green field. Please note that the area listed as having been part of the mine is an approximation.<ref>Image created by a member of the Energy Education team from a Google Map image found here.