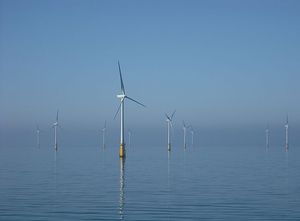 Offshore wind turbines operate by transforming the kinetic energy in wind over water into rotational kinetic energy which is used to generate electricity. Turbines can be installed both in ocean waters and inland lakes and are typically around 80-100 meters high with a rotor blade diameter of 20-50 meters.[2]

Research is ongoing into the development of floating turbine designs. Floating turbines are of interest because potential development sites would no longer be limited to shallow waters. Floating turbines could be positioned in areas with the strongest winds without being limited by water depth.[4] In addition, some areas such as the Mediterranean and Arctic that are too deep to allow fixed-bottom turbine construction to be suitable for development.[4]

The challenge of floating turbines is to create structures that are capable of withstanding the forces of high wind speeds and open-ocean waves without a foundation built into the sea-floor. Technological development is currently focused on improving the substructure, which is the floating platform the tower is constructed on.[5] The substructure must be capable to holding the tower steady and upright while remaining in the same location via a system of cables anchored to the sea floor.[5] To date, several floating turbines have been designed but are still limited to a water depth of around 200 m because of the necessity for an anchoring system to hold the turbine in place.[4]