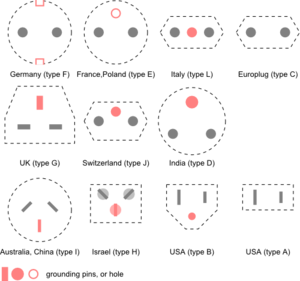 Figure 1. Outlet layouts from around the world.[1]

Domestic electrical outlets supply 120 volts in North America and 220-240 volts in Europe, with most nations having outlets supplying voltages similar to one of those two values. Socket size and shape vary greatly from country to country (see figure 1), and for more information on the various sockets and plugs used around the world, visit World Wanders. These differences don't change the basic design for creating a circuit to draw electricity from the grid. Throughout these different designs some fundamental components remain the same for most types of sockets.

Figure 2. A labelled diagram of a polarized two-pronged outlet.[2]

Most outlets are polarized for safety. Polarized plugs can only be inserted into them one way (which seems annoying, but is actually an important safety feature). In North America, this is accomplished by having two differently sized slots in addition to the rounded grounding slot, the larger of which is called the neutral line, and the smaller called the hot line (see figure 2). The neutral is connected by a wire to ground, so its voltage is 0 V. Instead, the hot slot supplies the voltage required to draw current, and when a plug is inserted into the socket, the energy flows in from the hot slot, through the circuit, and ends at the neutral, which disperses the energy into the ground.[3] Of course, to complete the circuit all the way back to the generator, the neutral is also connected back to the original distribution system in addition to being grounded at multiple locations.[4]

The benefit of polarization is that polarized plugs can only be inserted in one orientation, so the switch to turn any device connected to the socket on or off can be built into the hot lead. In a non-polarized plug, the switch may only open the circuit at the neutral lead, which means that most of the internal circuitry of the device is still considered "hot" and can lead to shock hazards.[5] 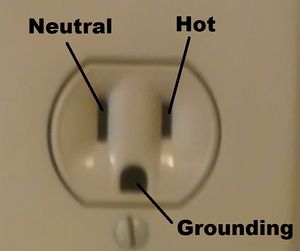 Most modern sockets in North America have a grounding slot in addition to the hot and neutral(see figure 3). The grounding wire is connected much like the neutral, as it also connects to a grounded neutral tie block.[4] The grounding slot is important for devices with a metallic casing or metal-cased power supply, like computers. If a hot wire in the internal circuitry of an electronic device frayed or somehow came into contact with a metallic casing, the entire device would then become a serious shock hazard. However, the grounding wire is directly connected to the casing of the device and will neutralize the risk of shock by diverting current to the ground, which will trip the circuit breaker, and stop the current flow to the device.[3] Also, the ground prong will be longer than the neutral and hot prongs so that the device is grounded before it ever becomes "hot" or "live."