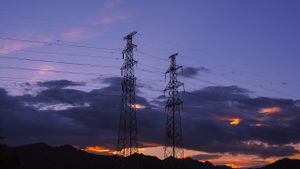 Electric current also referred to as amperage is the amount of electric charge flowing per second within a conductor. It is what carries the electric power from power plants, through the transmission system and distribution grid for industrial and home electricity use. It is otherwise known as electricity. The intensity of current is determined by the amount of charge flowing per second and is measured in amperes, abbreviated as A or amp. When electric charge flows in one direction it's called direct current and when the electric charge wiggles back and forth, alternating directions, it's called alternating current.

The amount of direct current can be calculated from the following formula:

However, coulombs of charge cannot be directly measured so usually a device known as a multimeter is used to measure current. Alternating current uses a similar equation to determine the amount of current, but the math becomes a little trickier since the direction of moving charge changes rapidly.

By convention, the term current (also referred to as conventional current) is defined by the charges moving from the positive terminal to the negative terminal. There also exists the term electron flow that is used to define charges moving from the negative terminal to the positive terminal. Please note that these are opposites. Conventional current is more popular, though either term may be used so long as this is done consistently to avoid any confusion. For a popular webcomic on how positive and negative charges are defined please visit XKCD.

Whenever current moves through a component or circuit, some energy is lost to heat. Some specific applications,like toasters, make use of this heat. Often this heat is an inefficiency of the system, like in electrical transmission. Excess heat can be a real nuisance in some applications like desktop computers that tend to overheat and require fans that circulate air to keep them cool.

Switches are used to turn current off (or on) almost instantly. As soon as the charge lacks a place to go (remember, current only moves when there's a full circuit) the current stops. If too much current starts to flow a special type of switch acts as an emergency safety measure to automatically shut off the current. These emergency safety measures include fuses and circuit breakers.

Electric current gives rise to magnetic fields, as discovered by Hans Øersted in 1819. Soon after this idea evolved by the works of André-Marie Ampère,[2] Jean-Baptiste Biot and Félix Savart to form the first laws of electromagnetism.[3] Electric motors are a common application of this phenomena—using currents and their magnetic fields to convert electrical energy to mechanical energy.

To learn about the physics of electric current please see hyperphysics.