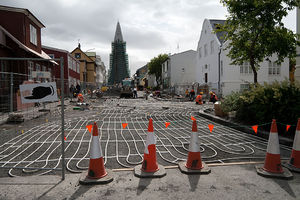 Figure 1. After circulating through a building, excess low-quality geothermal heat may be directed to sidewalk heaters in order to melt snow.[1]

Not to be confused with geothermal heat pumps, which use energy stored under the Earth's surface that originated from the Sun.

Geothermal district heating is the use of the Earth's natural thermal energy in order to provide heat to a group of buildings.[2](see Figure 1). There are locations on Earth that may make better use of this, due to being situated on "geothermal hot spots" (shown in Figure 2) where they have access to higher underground temperatures. The first use of district heating occurred in the 14th century in France.[3]

The primary uses of geothermal heat is for residential or commercial water heating and space heating. Hot water from surface features or shallow wells circulates through individual buildings or community-wide water systems. Excess heat from these applications may also be sent to sidewalk heaters in order to melt snow (Figure 1).[5]

Some countries that are located on geothermal hot spots rely on these methods of heating. In Iceland, nine out of ten buildings are heated using geothermal energy.[8] Certain places within the USA and Turkey also make considerable use of geothermal district heating.[9][10] The United States' installed capacity of direct use systems totals 470 MW, or enough to heat 40 000 average-sized houses.[4]