The liquified natural gas industry refers to the production, trade, and consumption of natural gas. While oil has been traded globally for decades, natural gas has tended to remain within its continent of origin. This means that different continents have had very different prices for natural gas. Liquefied natural gas (LNG) has started to change this process. There has been significant growth of the LNG market [1] in recent years, largely in the countries with the largest markets. However, in order to meet the continuous increase of LNG demand, many regions have pursued in LNG export activities to diversify gas supply.

This inequality has lead to LNG having tremendous growth recently, and potentially into the future, see figure 1a. As existing regions continue to grow their natural gas consumption, and developing regions begin to consume greater quantities of gas themselves, the production of LNG is forecasted to rise 4.3% per year.[2] Most of Russia’s exports are imported by Europe.[2] By 2030, LNG will account for 15.5% of the total gas consumption as shown in the figure 1a.[2] As worldwide trade of natural gas in the form of LNG rises, the need for new infrastructure will rise as well. Both regasification terminals and liquefaction plants will need to be built or scaled up for increased capacity. The figure 1b shows the historical and forecasted growth of infrastructure from 1990 to 2020. 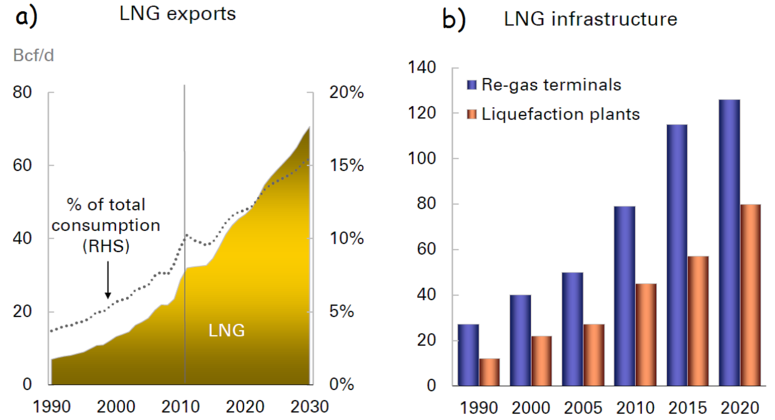 There are many other LNG markets in the world, here are a couple of interest.

The current LNG imports by Asian regions accounts for 60% of the global LNG trade, with Japan and India importing the most LNG in Asia.[3]

LNG import remains particularly strong in Japan because of the Fukushima disaster in 2011, which lead the government to shut down the nuclear plants, which dramatically increased Japan's natural gas demand. Japan's largest LNG suppliers are Indonesia and Malaysia, with a substantial supply coming from Qatar and Australia.[4]

Russia, one of the world's largest energy supplier, is becoming one of Asia LNG exporters to meet the growing demand. Russia currently has an LNG plant located on Sakhalin Island off the country's East Coast that provides an annual capacity of 10 million tonnes.[5]

Canada is a new entrant in the global LNG industry with limited export and import facilities implemented. At the present time, there are more than 10 proposed LNG projects in British Columbia for economic development.[6]

Canada currently has one operational LNG located in Saint John, New Brunswick. Canaport LNG is an import terminal that receives and regasifies LNG, which transports natural gas to both Canadian and US markets via the Brunswick Pipeline.[6]

Due to the current economic decline, combined with a decrease in U.S. demand for natural gas, there is a reduced need for LNG exports to the United States. Canaport is currently debating conversion to an export terminal for this reason.

As of November 2015, Canada does not have any LNG export terminal[7]. The Canadian National Energy Board is currently reviewing a number of applications to put these into place, please see LNG Export and Import Licence Applications for up to date information on the status of these applications.