Milankovitch cycles are three ways the Earth's orbit around the Sun changes over the course of tens of thousands of years. Each of the three, eccentricity, axial tilt and precession all influence how much solar energy hits the Earth. This change has been a major factor controlling periods of glaciation and seasons.[1] These cycles were discovered and mathematically developed by after astrophysicist Milutin Milankovitch. The three components once calculated together, predict and show the amount of solar radiation the Earth receives thus predicting and portraying the advances and retreats of Earth’s glaciers through time.[2] 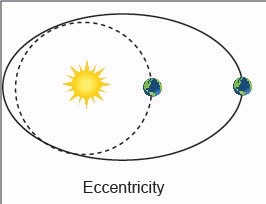 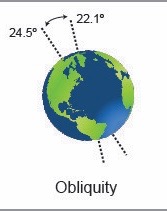 Axial tilt or obliquity is the angle of Earth’s axis from the orbital plane. The tilt changes from a range of 22.1 to 24.5 degrees over a period of a 41,000-year cycle. This small change in degree affects our seasons greatly. Earth is currently sitting at 23.5 degrees, which results in our warm summers and cool winters. At 24.5 degrees our seasons would be much more extreme, winters being much colder and summers much warmer. At 22.1 degrees, our seasons would be less severe, winters would be a bit warmer resulting in an increase of humidity and our summers would then be cooler causing the ice sheets to melt at a much slower pace. The minimal melting in the summer and the accumulation of humidity in the winter would then encourage a growth in ice sheets.[1][5] 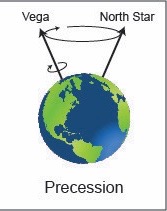 Precession is the gradual shift of Earth’s rotational axis, which controls the timing of our seasons. This can also be described as a dreidel wobbling moments before it falls. This affects the dates at which perihelion and aphelion occur. This wobble is a 26,000-year cycle in which the celestial pole will face a different north star. Our current North Star is Polaris but when the pole shifts, the North Star has and will be Vega. This slight shift in direction causes the winter and summer solstices to reverse. As our precession changes, our winters begin later and our summers last longer.[1][4]