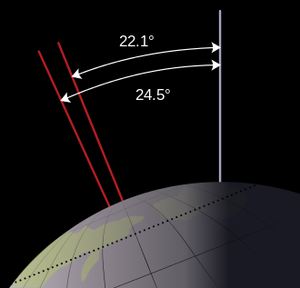 Axial tilt, also called obliquity, refers to the angle a planet's rotation axis makes with the plane of its orbit. The Earth is currently tilted 23.5° from this plane, resulting in many remarkable effects, including the seasons around the planet. The tilt of the Earth can be attributed to the stabilizing effect of the Moon.[2] Axial tilt contributes to the Milankovitch cycles that have changed the Earth's climate in the past.

The tilt of the Earth's rotation axis is part of what allows an appropriate climate for Earth to support life. By altering what portions of the Earth get the majority of incoming sunlight, no region on Earth is allowed to heat to extreme temperatures.[2] This can be seen in Figure 1; throughout Earth's orbit around the Sun the Northern and Southern Hemispheres alternate which side directly faces the Sun, preventing any region from extreme heating. 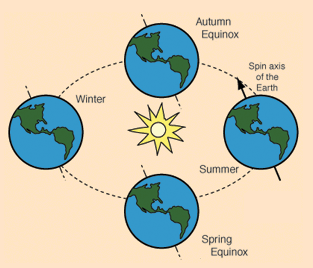 Figure 2. The tilt of the Earth is what causes seasons to occur.[2] These are the seasons in relation to the Northern Hemisphere.

The tilt also produces effects such as the Midnight Sun, where the Sun never sets during some summer nights in very high-latitude regions.

The tilt of the Earth results in the poles not receiving as much energy as the equator - at a 23.5° tilt, the poles only get around 40% of the energy the equator gets.[2] This 23.5° tilt is also not set indefinitely as it changes over long periods of time (around 40,000 years), ranging between 22.1° - 24.5° (a factor in natural climate change).[4] Both of these factors allow for ice to build up year-after-year in high latitudes, eventually creating massive ice sheets. This ice has drastic effects on the Earth's climate system due to its high albedo, among other things.