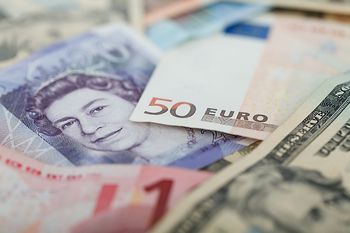 Currency can be thought of ascoins and paper bank notes (bills) commonly referred to as money. More formally, currency is a medium of exchange issued by the central bank of a country that is declared to be legal tender and is exchanged for goods and services, it is also used as an accounting tool and in certain forms it acts as a store of value.[2] Bank notes and coins are also referred to as hard currency. Currency can be physical or digital, one can have a $100 bill that they use to purchase gasoline from a gas station or they could pay their electrical utility bill online through an electronic transaction. This is still the legal tender however. A currency is essentially anything that is commonly accepted as a medium of exchange, today it is bank notes and coins but in the past, societies have used shells, stones and many other methods. The use of money eliminates the problem of the barter system whereby two parties have only one good or service to trade each other. This raises a problem when one party does not want the others good or service as it has no value to them.[3]

There are other forms of currency such as BitCoin which is a 'crypto currency' and is exclusively digital and is therefore not the issue of any state or central bank.[4] Crypto currencies are the subject of much debate and are not in wide circulation nor are they recognized on the global market as a legitimate currency.

Commonly referred to as Fiat money, it obtains its value by decree, that is, a government or central bank determines the value of a particular denomination of a piece of money and it is accepted as such.[5] The value of the currency is dictated by the central bank, however, fiat currency is subject to market forces which help determine the value of the currency on the open market. A central bank such as the Bank of Canada (BoC) might issue a $10 bank note and within Canada it is valued at a 1:1 exchange ratio. If the same $10 is used to purchase goods and services from the United States it is subject to the foreign exchange market forces which might value it at $0.85 USD and therefore the value of the $10 on the open market (towards the US) is only $8.50.

Fiat money is susceptible to depreciation of its value through inflation and in some cases it may become worthless through the process of hyperinflation.[6] This is because it is not backed by an asset and therefore does not have any intrinsic value to ensure its standing in the market. That said, asset backed currencies have been abandoned as the value of commodities such as gold are prone to fluctuation on the global commodity markets. Almost every country in the world uses fiat currency; this allows governments to control economies monetary policy.

An asset backed currency has intrinsic value as it is backed by an asset such as gold.[7] An asset backed currency can be traded in for a given quantity of the asset it is backed by. An example of this is the USD being pegged to gold after the Bretton Woods Conference of 1944 whereby the world pegged their currencies to the USD and the USD was backed by gold. Under this system any country with USD could exchange their USD with the Federal Reserve for a given amount of gold.[8] Currently almost every country in the world (including both Canada and the United States) uses fiat currency. 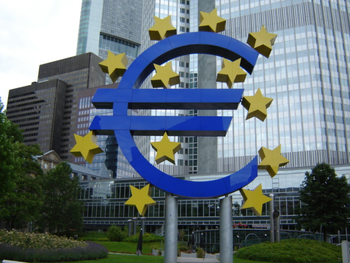 The Euro (€) is used as a common currency within the Euro Zone (the countries of the European Union which use the Euro), so it is not the currency of another country but that of a supranational entity, the European Central Bank (ECB). This type of shared currency creates a currency union, which is a relationship that exists when two or more states share a common currency and is predicated on a shared or similar monetary policy.[13] The Euro acts the same way any other currency does on the market despite its unique disposition.