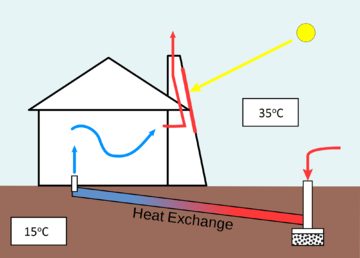 Figure 1. A diagram of a solar chimney that uses a secondary vent that travels below ground. This helps to cool intake air when the chimney is used for cooling.[1]

Solar chimneys are easy and inexpensive means to heat and ventilate a building. First, a chimney is built and coated in some dark or black material. It is coloured black because this minimizes the amount of sunlight that is reflected off of the chimney, absorbing more of the heat and ensuring more of the heat is transferred to the air inside the building.[2] As well, these chimneys are generally placed on a South facing wall if the home is in the Northern hemisphere. For an explanation of why it is the south facing wall, click here.

Cooling a space using a solar chimney is slightly different than cooling using a Trombe wall. Since a roof overhand cannot be installed in addition to a solar chimney, two additional vents are present. The first vent has been mentioned, the one at the top of the chimney.[4] The second is at the opposite end of the building, providing an opening between the building and outside air to allow for ventilation. When solar radiation hits the side of the chimney, the column of air inside the chimney is again heated. The vent at the top of the chimney is kept open so this heated air is not trapped. This heated air is pulled up and out of the chimney, pulling new air in from the outside and creating a sort of "draft" that provides cool, fresh air into the building.[3]