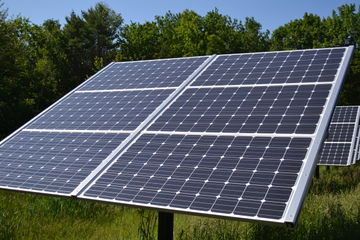 Figure 1. The orientation of a solar panel is important in ensuring its power output is maximized. Some solar panels track the Sun whereas some, like the one above, are fixed in their angle.[1]

The placement and orientation of solar panels is just as important as which type of solar panel is used in a given situation. A solar panel will harness the most power when the Sun's rays hit its surface perpendicularly.[2] Ensuring that solar panels face the correct direction and have an appropriate tilt will help ensure that they produce maximum energy as they are exposed to the highest intensity of sunlight for the greatest period of time.[3] Some solar arrays follow the Sun using solar tracking systems which significantly increase energy production. The following sections refer only to 'fixed' or non-tracking systems.

In the northern hemisphere, the general rule for solar panel placement is, solar panels should face true south (and in the southern, true north). Usually this is the best direction because solar panels will receive direct light throughout the day. However there is a difference between magnetic south and true south that must be considered. Magnetic south is the "south" shown when a compass is used, and this south points to the Earth's south magnetic pole. Solar panels, however, need to face solar or geographic south, which is the direction towards the South Pole.[3] By the same reasoning, if the solar panel is located in the southern hemisphere, the panel should instead face in the direction of true north.

Depending on how solar panels are being used, it may also be beneficial to have a slight rotation away from due south. For example, depending on the use solar panels used for a home should face slightly south-west. These panels collect more energy when they face due south, but the energy is more useful if it comes later in the day. This turn allows the solar panels to produce more electricity at the hours when it is needed. Pointing the panels slightly south-west, in the direction of the setting Sun, would allow the panels to produce more energy in the evening, when people are home and using more appliances. The decrease in total production is balanced by the electricity available when it is needed most. In most areas there is enough electricity available from other sources in the morning and midday.[4]

When solar collectors are used for heating and lighting specifically - particularly in the form of fenestration such as windows - it is actually best to have these collectors facing somewhat east. Warming the house for the day means morning sunlight is needed most.[5]

The angle or tilt of a solar panel is also an important consideration. The angle that a solar panel should be set at to produce the most energy in a given year is determined by the geographical latitude. A general rule for optimal annual energy production is to set the solar panel tilt angle equal to the geographical latitude.[6] For example, if the location of the solar array is at 50o latitude, the optimal tilt angle is also 50o. Essentially, the closer a solar panel is located to the equator the more the panel should be pointing straight up. The closer the panel is to the poles, the more they should tilt towards the equator.[3]

The angle of solar panels can also influence the power output due to climatic and environmental factors. In northern climates, snow accumulation on low-tilt panels can reduce or completely block the Sun's rays from reaching the solar panel during the winter months. Although this effect will vary for every location, one study in Edmonton, Alberta, Canada concluded that the annual energy loss due to snow accumulation ranges from 1.6% at optimal tilt (53o) to 5.3% at low tilt (15o).[7] Additionally, low-tilt solar panels are more susceptible to "soiling" by dirt and debris which can also partially block the Sun's rays.