Cold water is usually denser than warm water (4°C is where water is densest). Water with a high salinity is also denser than less saline water.[1] Deep ocean currents are driven by differences in the water density, which is controlled by temperature (thermo) and salinity (haline), hence the name "thermohaline circulation". This process is also sometimes to referred to as the "ocean's conveyor belt system".[2] See figure 1 to see how this conveyor belt moves around the world.

Any major change to ocean circulation could have damaging effects on the water cycle and weather patterns.[3] 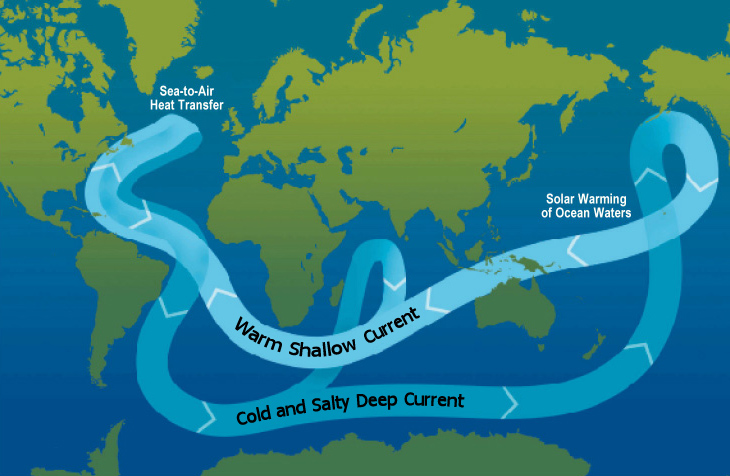 Figure 1. The Thermohaline Circulation Loop.[4] This loop moves water and heat around the globe and is referred to as the "ocean's conveyor belt system".[2].

Thermohaline circulation plays an important role in supplying heat to the polar regions. It influences the rate of sea ice formation near the poles, which impacts other aspects of the climate system (such as the albedo).[1]

Sea ice is mainly formed from non- to slightly saline water. This means that the salt in ocean water is expelled back into the ocean as a salty layer beneath the ice. The ice also cools the salty layer, which means it is now highly saline and cold, making it very dense. The dense water layer sinks, promoting circulation.[1] When ice melts, it adds fresh water to the ocean, decreasing salinity and affecting the circulation pattern. In certain areas near the polar oceans, the colder surface water also gets more saline due to evaporation.[5]

The movement of the surface layer of the ocean is driven mostly by wind currents. As the surface water sinks into the deep ocean, it forces the deep water to move horizontally until it can find a region on the globe where it can rise back to the surface and complete its circulation loop. This usually occurs in equatorial regions of oceans, typically in the Pacific and Indian Oceans.[5] The North Atlantic Ocean around Greenland, Iceland, and the North Sea are major regions where surface water pumping occurs.[5]

The surface ocean current brings new water into the northern regions from the South Atlantic by way of the Gulf Stream and the water returns to the South Atlantic using the North Atlantic Deep Water current. The constant influx of warm water into the North Atlantic polar ocean keeps the regions around Iceland and southern Greenland mostly free of sea ice year round.[5] Both surface and deep waters flow from west to east around Antarctica. This ‘circumpolar’ motion links the world's oceans and allows the deep water circulation from the Atlantic to rise in the Indian and Pacific Oceans and the surface circulation to close with the northern flow in the Atlantic.[5]

The thermohaline circulation loop is quite complex (Figure 1). The Bering Straight inhibits deep currents from flowing out of the Arctic Ocean and into the Pacific Ocean because of its shallow ocean floor.[1] The dense North Atlantic water on the floor moves southward where it joins the sinking waters in the Southern Atlantic. Like the Bering Straight passage, a shallow portion of the ocean floor blocks the flow of water from moving into the Pacific Ocean.[1] This passage is called the Drake Passage, which is between the Antarctic Peninsula and the southern tip of South America and it prevents the current from flowing westward. This causes the thermohaline circulation to move east where it splits in two directions.[1] Some flows north along the east coast of Africa into the Indian Ocean, while the rest continues to move east along the southern coast of Australia where finally, moving north, making it into the Pacific basin.[1]

When sea ice moves south through the Fram Strait into the North Atlantic, it melts and creates a layer of fresh water at the surface of the ocean. This fresh water is less dense than saline water and tends to stay at the top of the ocean. This lower density deters the normal process of sinking at high latitudes that supports thermohaline circulation, which makes it harder for the northern movement of warm water from the equator.[3] Climate scientists have gathered evidence which has shown that this inactive process happened over a period of several years in the late 1960s and early 1970s, when additional fresh water entered the North Atlantic Ocean and affected the climate of northern Europe. Researchers call this event the “Great Salinity Anomaly.”[3]