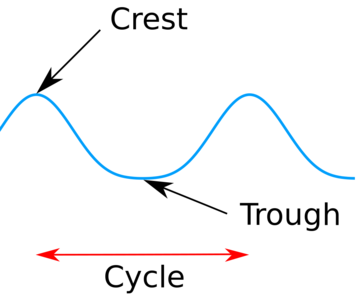 Figure 1. A diagram of a simple wave, showing the crest and the trough as well as a label showing one cycle of the wave.[1]

A wave is some disturbance that travels through a medium, creating motion that propagates through the medium from one location to another. This wave can carry energy from its source to another location.

Waves can be considered travelling waves if there is some disturbance that propegates, such as when a pebble is dropped into a pond, creating ripples.[2]. There are also waves known as standing waves. These waves are created when waves interfere with each other, and parts of them appear to "stand" in place motionless. Standing waves are important in the operation of a variety of musical instruments.[3] For more on standing waves, click here.

Waves propagate through a variety of different mediums. This propagation simply means that a series of wave pulses - or a single disturbance, think of a single "bump" if a rope is moved up and down - are connected together to form a series of disturbances with crests and troughs that form a wave. This wave vibrates up and down in a periodic manner, creating the stereotypical wave "shape". This wave shape consists of a peak, the highest point that a wave reaches, and a trough, the lowest point that a wave reaches. When combined, this peak and trough create a wave cycle equal to one wavelength.

It is important to note that when waves are in the same location, they can interfere with other waves or even with themselves. This process of interaction leads to diffraction and interference. When waves move from one medium to another (for example if they move from air to glass) there is also refraction.

As waves move from one place to another, they carry energy. Generally, the medium itself doesn't move much as it is the disturbance that is being transmitted. For example, sound waves make the air molecules vibrate, but it doesn't move air the same way that wind does. Since the particles of the medium itself don't move, just vibrate, waves are said to be a type of energy transport phenomenon. This means that a disturbance moves through a medium particle to particle, moving energy across a distance during this process. When particles stop moving from the disturbance, they have the same amount of energy they began with and thus vibrated momentarily only to move energy.[4]

This ability to transport energy makes waves unique and unlike particle to particle collisions.

The University of Colorado has graciously allowed us to use the following PhET simulation below. In this simulation, different types of waves can be created by moving the wrench on the left-hand side of the screen.