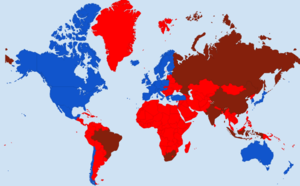 Figure 2. Primary energy use in OECD (blue) and non-OECD (red) countries, see the map in figure 1 for which countries are part of OECD. Use the dropdown 'compare by' in order to look at countries, and the 'country selection' to look at particular countries. Click the 'per capita' to see total energy use of these countries.