(Redirected from AC to DC adapter)

Figure 1. An AC adapter used for charging a laptop battery.

AC adapters convert a higher-voltage alternating current to a lower-voltage direct current for use with devices that require a relatively constant voltage (within a tolerance). Direct current is also required to recharge batteries, making AC adapters essential for electronic devices like laptops (see Figure 1) and cell phones.[1] Older AC adapters waste quite a bit of electricity in the form of standby power, but recent regulations and subsequent innovations have reduced the amount of electricity wasted considerably. See Standby power for more detailed information.

A simple AC adapter consists of a transformer, a rectifier, and an electronic filter. The transformer initially converts a relatively high-voltage alternating current that is supplied by an electrical outlet to a lower voltage suitable for the device being powered.[2][3] A rectifier then converts alternating current into direct current. There are two separate types of rectifiers: the half-wave rectifier and the full-wave rectifier.

Figure 2. A half-wave rectifier.[4] The arrow-shaped symbol at the top of the electric circuit is a diode that only allows electron flow from right to left across the diode. The graph on the left is the input voltage and the graph on the right is the output voltage.

For more information about rectifiers, visit ElectronsTutorials or All About Circuits. 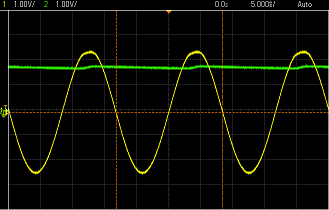 As seen in Figures 2 and 3, the output voltage of the two rectifiers still varies greatly. However, a constant voltage is required for most devices that operate on direct current. A smoothing circuit or capacitor is used to achieve this. At its simplest, a circuit component known as a reservoir capacitor or smoothing capacitor is placed at the output of the rectifier. Essentially it releases stored energy when no voltage is being output from the rectifier.[7] This creates a fairly steady voltage. However, some ripples from the AC voltage remain (See Figure 4).

In modern use the most common adapter is the Switched Mode Power Supply (SMPS). These are considerably more complex than linear regulated power supplies and have clear advantages. The main advantage for SMPS is that it gives DC supplies that can deliver more power for a given size, cost and weight of the adapter.[8]

SMPS is used in many applications such as battery chargers, laptops, vehicles, LED lighting, and other consumer electronics. To learn more about how SMPS units work, visit Learn about Electronics.