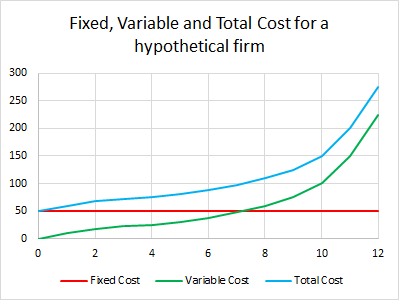 Figure 1. A graph showing how the fixed costs stay constant, the variable costs change and the total cost is the sum of the two.[1] 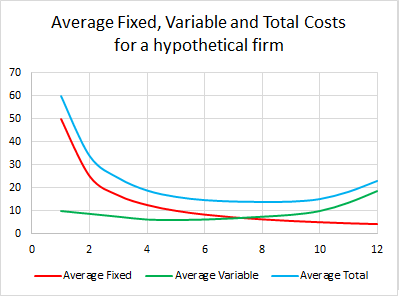 A cost is what a firm, an individual or society pays to produce or consume goods and services. It is the consumption of resources such as labour time, capital, materials, fuels, etc. In economics, all resources are valued at their opportunity cost, which is the value of the alternative use of the resources. Costs are defined in a variety of ways and under a variety of assumptions that affect their value. The opposite of a cost is a benefit and often both are considered together. For example, net cost is the difference between gross costs and benefits.[2]

A variable cost is incurred by a firm as it changes its level of output. Essentially, a firm pays more to produce more. Variable costs are inputs that can be easily adjusted such as the purchase of raw materials for manufacture.[3]

If a firm running a natural gas power plant to generate electricity responds to greater demand in the market it will need to increase its output. The firm would then have to buy more natural gas to burn and hire more labour to operate the plant. All of these additional expenses can change with demand, which is why this is the variable cost.

To avoid excess fixed costs, the firm may have additional workers on a standby contract and can respond to high periods of demand. Because these workers are only paid when they work and they only work when output is higher, the cost is variable rather than fixed. In contrast, the employees would be on salary but may not work all the time.

As seen in figure 1, variable costs do go up as more units are produced.

The time horizon, determines what category a cost falls into. For example, a new lease contract with a higher rate would be a higher fixed cost because it does not change often. The price of a commodity such as natural gas or oil is variable because it changes almost daily. The longer the time horizon, the more time a firm has to adjust and the more costs will be fixed as opposed to variable.[4]