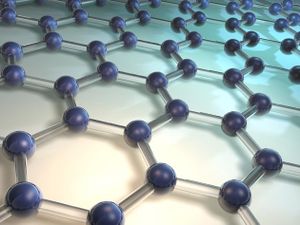 A single layer of carbon atoms arranged in a hexagonal "honeycomb" structure to form graphene [1].

Graphene is a one atom thick crystalline form of carbon. Graphene's structure is organized into a hexagonal (honeycomb) shape and can exist naturally in the stacked form of graphite or charcoal. Graphene also forms the fundamental structural units of graphene nanotubes. Graphene is best known for its excellent tensile strength, transparency to light, and high electrical and thermal conductivity[2]. It has an extremely high surface area-to-weight ratio, which is responsible for many of its properties.

The electrical and thermal conductivities of graphene are among the highest of any known element at room temperature. The thermal conductivity is the rate in which thermal energy can transfer across a material. The surface area is the total area of the objects faces. The electrical resistance of graphene is among the lowest of any known material at room temperature. It can be defined as the ease in which electrons can pass through the material. Graphene also has very high transparency to light, only absorbing 2.3% of the total white light passing through it. Currently, graphene is very expensive, but its price is predicted to drop by a factor of 4 by the year 2022(cite?).

Table 1. The surface area, resistance and thermal conductivity of graphene, copper and silver [3][4].

Electronic: Graphene has a low electrical resistivity, allowing it to be used in LCD display screens, transistors, and electric circuits. Graphene is also applied to solar cells due to its high optical transparency.

Energy storage: Due to graphene's high surface area and low electrical conductivity, it can be applied as electrodes in supercapacitors and Lithium ion batteries [5].

Distillation: With a uniform pore size, graphene is used in ethanol distillation and the desalination of water [6].

Medical: Due to increasingly cheaper production methods, scientists have proposed graphene be used for microbial detection [7].

Graphene can be produced by a variety of methods. Currently, the cheapest methods to produce graphene are laser scribed graphene, inkjet printing, thermal reduction of graphene oxide, as well as chemical deposition of graphene. 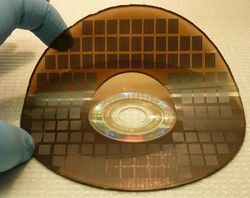 A sample of laser scribed graphene at a UCLA laboratory [8].

Laser scribed graphene is produced by pouring graphene oxide onto a plastic coated DVD disk and left to dry. Once dried, the graphene and the DVD disk are inserted into a LightScribe DVD burner. The DVD burner emits radiation on the graphene oxide, splitting the bonds between the carbon and oxygen groups. Graphene is the product of this reaction and can be seen by the change in colour from light brown to black on the DVD [8].

Graphene is used to create carbon nanotubes, which are a small, hollow fiber with the highest tensile strength known to man. They are extremely expensive at this point, but future applications include lightweight body armour, ultra-strong carbon fiber, and even small and lightweight wires for carrying electricity.