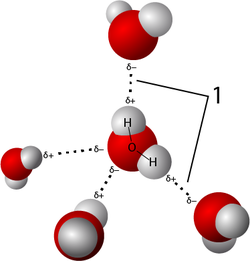 Figure 1. A depiction of hydrogen bonding between water molecules. [1]

A hydrogen bond is not a "bond" in the same sense as the chemical bonds that hold the atoms in a molecule together. They are about 10-100 times weaker than a covalent bond[2] (although stronger than other attractions between molecules). A hydrogen bond can occur between molecules when the molecules are polar (they have an electric dipole) and the dipole involves a bond to a hydrogen atom. The slight positive and slight negative of the dipoles in two different molecules attract the molecules to each other.

Compared to compounds that cannot hydrogen bond, compounds that do hydrogen bond with each other will have higher boiling points and melting points. The presence of strong hydrogen bonds in water explains many of its unique properties - it is a liquid at room temperature, when most other molecules of a similar size are gases.