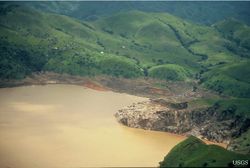 Figure 1. Lake Nyos after the release of gas was left an unpleasant brown color.[1]

Lake Nyos is a lake in Cameroon which released a lethal cloud of gas on August 21st, 1986, killing 1800 people and 3500 livestock. A cloud of carbon dioxide elevated out from the lake and proceeded to roll into the valley below at 100 km/hr.[2] The cloud grew up to 100 meters in height, and spread over 25 kilometers before finally being dispersed into the atmosphere, leaving people and livestock dead in its wake.[3]

The released cloud contained a vast amount of carbon dioxide (CO2), which lingered at ground level for nearly 48 hours due to CO2 being denser than air. The CO2 killed people directly upon inhalation, as it inhibits the ability for the body to get enough oxygen. Low concentrations of CO2 are harmless, however the concentrations near the lake were over 15% CO2 content (compared to the typical 0.04% concentration of the atmosphere).[3]

Situated in northwestern Cameroon, Lake Nyos is located in a crater on the edge of inactive volcano. Below the inactive volcano, a pocket of magma resides 80 km below the surface.[2] CO2 from the magma below slowly percolates upward, while mixing with groundwater and accumulating in the bottom of the lake. When the gas at the bottom of the lake reaches a concentration threshold where it can no longer lie in the lake, a bubble of CO2 bursts from the lake bed.[2]

Any rapid release of carbon dioxide is a concern, and the Lake Nyos disaster shows how devastating such releases can be. This disaster is often referenced when talking about the dangers of carbon capture and storage. For example please see 'Can we bury global warming' by Robert Socolow.[4]

Cause of the disaster 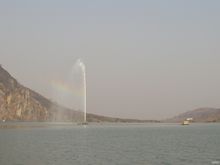 The source of the CO2 was debated within the scientific community for many years, however scientists eventually agreed that the source was nearby volcanic activity. The CO2 from this was dissolved into groundwater and slowly transferred into the lake, increasing its CO2 concentration over time. Normally crater lakes such as Lake Nyos are able to release CO2 periodically, however Nyos was different and allowed the carbon dioxide to reach very high concentrations.[6]

Although the source is well agreed upon, the actual cause of the gas release is still debated. The possibility of a volcanic eruption were ruled out upon studying the chemical composition of the lake, along with other factors. One theory suggests a landslide within the lake, while others attribute a slow influx of heat as the cause of an instability leading to release.[3] In general, a gradual heating of the depths of the lake is widely accepted as the cause for the large gas release.[6]

Future of the lake

Studies of the lake following the disaster show more CO2 building up beneath the surface. An engineering effort was put forth to deal with it safely. An electric pump was installed to release the CO2 in a large fountain, as seen in Figure 2. The soil on and around the crater is rich and fertile, so roughly 10 000 people make their homes near the lake.[2] After the 1986 disaster, people were eager to return home.