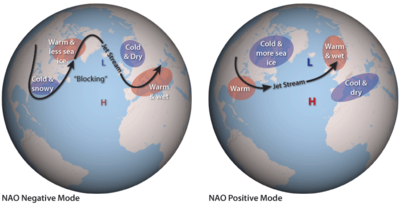 Figure 1. This image illustrates the surface pressure in both negative and positive modes of the North Atlantic Oscillation.[1]

North Atlantic Oscillation (NAO) is a climate pattern that has a strong influence over North America, Greenland, and Europe.[2] The NAO is a natural form of climate variability, explaining short and long phases in climate caused by natural, large scale features. Other natural patterns of climate variability include the Northern Annular Mode, Pacific Decadal Oscillation, and the Atlantic Multidecadal Oscillation. The NAO forms a permanent low pressure system which exists over Greenland and Iceland, with a permanent high-pressure system existing over a group of islands roughly 1400 km west of Portugal, known as the Azores.[3] For most of the year, the high and the low are mild, and their influence on the Atlantic basin climate is minimal. However, when winter enters, all of this begins to change. Both pressure systems grow much more intense and begin to fluctuate from week to week between the two different states. In one state, the positive NAO, the high-pressure system grows especially high. While the second state, a negative NAO, a low-pressure system grows especially low, creating a large pressure difference between the Azores and Iceland.[3]

The influence of the NAO and its phases can be felt across the entire Atlantic Ocean and the surrounding continents. Between the two circulating, clockwise and counterclockwise circulation patterns created by the high and low systems, there is an area where they come together and form a steady, forward moving current that channels weather systems from the United States to Europe.[3] To understand the NAO, first understanding what air pressure means is important.

Researchers have had relative success with short term forecasts by linking the NAO to sea surface temperatures through statistical correlation, and over a longer time frame, they have discovered that global warming may be slowly influencing the strength of the NAO and its effect on the climate.[3] 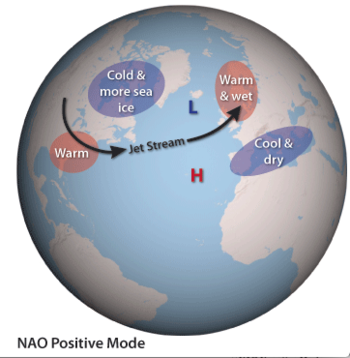 Figure 1. This image illustrates the surface pressure in the positive mode of the North Atlantic Oscillation.[4]

The NAO is in a positive phase when both the sub polar low and the subtropical high are stronger than average. During positive NAO phases, the increased difference in pressure between the two regions results in a stronger Atlantic jet stream and a northward shift of the storm track. Consequently, northern Europe experiences increased storminess and precipitation, and warmer than average temperatures that are associated with the air masses that arrive from lower latitudes. At the same time, southern Europe experiences decreased storminess and below average precipitation. In eastern North America, the positive phase of the NAO generally brings higher air pressure near the Azores.[3] This causes less snowfall for the Washington DC/New York corridor. 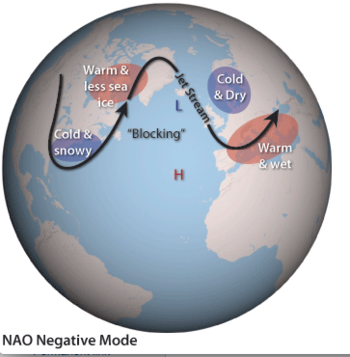 Figure 2. This image illustrates the surface pressure in the negative mode of the North Atlantic Oscillation.[5]

The NAO is in a negative phase when both the sub polar low and the subtropical high are weaker than average. During negative NAO phases, the Atlantic jet stream has a more west to east orientation, and this brings decreased storminess, below average precipitation, and lower than average temperatures to northern Europe. In contrast, Southern Europe experiences increased storminess, above average precipitation, and warmer than average temperatures. In eastern North America, the negative phase of NAO generally brings lower air pressure, which leads to winter storms, and cold weather that are normally meant for Boston and Maine to start heading south.[3]