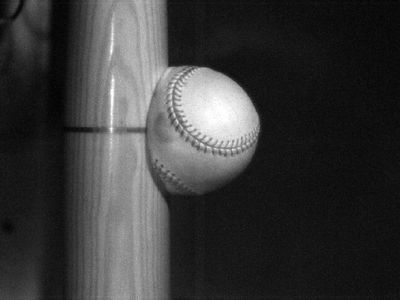 Figure 1. First, a baseball is deformed by the normal force. Then, the ball bounces off the bat and returns to its spherical shape. In that process, the atoms of the bat, ball, and air will vibrate faster, losing some of its energy.[1]

An example of non-conservative forces in a baseball game:

All real systems have some non-conservative forces associated with them. For example, when the moon rotates around the Earth it creates tidal forces, which will slightly warm the oceans (microscopic motion of the molecules in the ocean). However, it is a small effect compared to the energy in the system.

By the second law of thermodynamics, all systems lose mechanical energy over time. It is important to note that non-conservative forces do not destroy energy they just convert it into a less useful (less ordered) form.

The University of Colorado has graciously allowed us to use the following PhET simulation. It explores how friction turns macroscopic motion into microscopic.