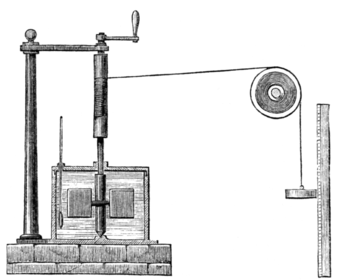 Mechanical energy can be converted into heat, and heat can be converted into some mechanical energy. This important physical observation is known as the mechanical equivalent of heat. This means one can change the internal energy of a system by either doing work to the system, or adding heat to the system. This concept is fundamental to thermodynamics which applies the ideas of heat and work in order to create useful systems such as engines, power plants, and refrigerators. This equivalence of heat and motion was tested in a classic experiment by James Joule in 1843, who used the change in potential energy of falling masses to stir water.[2] The water increased in temperature, much like it would when put over a flame. This showed that the downward motion of the masses which caused the water to be stirred (a form of mechanical motion) could in fact be equated to an increase in water temperature—or an increase in the heat,

This idea of work and heat equivalence is stated in the First law of thermodynamics, which says that the change in internal energy of a system is the sum of the work done and the heat added to any system. From this, if a system is observed at any state, it is impossible to tell whether it reached this state from an input of work, an input of heat, or a combination of the two.[3] This is shown in Figure 2 below.

Figure 2: It is impossible to distinguish between work and heat when observing the final state of a system[4]