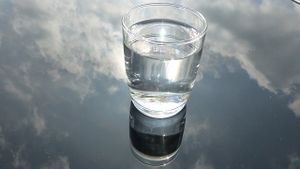 Figure 1. A glass of water is deceivingly calm; internally it is a mass of high speed particles and strong chemical and nuclear bonds.[1]

Internal energy [math](U)[/math] is the microscopic energy contained in a substance, given by the random, disordered kinetic energy of the molecules. In addition it includes the potential energy between these molecules, and the nuclear energy contained in the atoms of these molecules.[2] Internal energy and thermal energy are very similar in a basic thermodynamic context. However, they differ becuase internal energy encompasses far more than just the average kinetic energy of molecules. This distinction is important because the potential energies between molecules and atoms is important for understanding phase changes, chemical reactions, nuclear reactions, and many more microscopic phenomena.