There are two major categories of traps, and are classified based on how the petroleum accumulates. The two main groups are structural traps and stratigraphic traps.[2] For a more in-depth description of the overall structure of oil and gas deposits, see oil and gas reservoir. 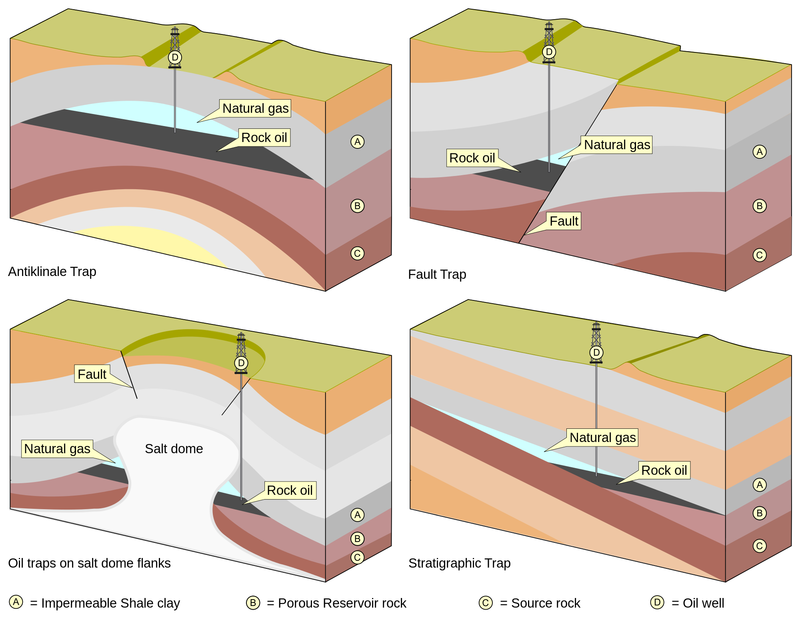 These traps are types that form as a result of some structural deformation - a bend or dip - of rock. These traps take on several forms and shapes as a result of different types of deformation. This deformation tends to take place over tens or hundreds of millions of years after sediment that creates the seals and rocks themselves have been deposited.[1] In these traps, the pores of the reservoir rock contain oil, gas, or water. Gas moves up in the trap as it is the lightest, with oil below it and water at the bottom. The cap rock prevents upward migration of these fluids.

These types of traps are formed by a folding of rock. Specifically, a sandstone bed covered with low permeability shale is folded into a trap that contains petroleum products. Hydrocarbons are trapped in the peak of this fold.[2] An anticline trap is shown in the upper-left of Figure 1. Most anticline traps are created as a result of sideways pressure, folding the layers of rock, but can also occur from sediments being compacted. For more information on anticline traps, click here.[4]

These types of traps are formed when reservoir rock is split along a fault line. Between the walls of the split reservoir, clay traps oil and prevents it from leaving the trap.[4] Other times there exists a pressure differential across the two sides of the fault that prevents the fluids from migrating.[2] A fault trap is shown in the upper-right of Figure 1. Although faulting is common in many petroleum fields, traps that result from faulting alone are not very common. Generally speaking, faulting creates some other type of structure that creates the main trap.[2]

Salt dome traps are formed as a result of below ground salt - which is less dense than the rock above it - moving upwards slowly. This upward migration of the salt can deform and break up rock along the way.[4] The process of this salt deforming rock is known as salt tectonics, and take place over hundreds of millions of years.[2] Oil and gas that flows through the reservoir rock will come to rest when it reaches the salt dome and is then trapped. A salt dome trap is shown on the lower left of Figure 1.

These traps are formed as a result of the deposition in sedimentary rocks. When the sediment that creates the reservoir rock is deposited in a discontinuous layer, the seals are created beside and on top of the reservoir. In some cases, these seals are made of impermeable or low permeability shale deposited around the reservoir, blocking the oil and gas inside. The seals themselves may also be source rocks.[1] A stratiographic trap is shown on the bottom right of Figure 1.