One example of a positive externality is the market for education. The more education a person receives, the greater the social benefit since more educated people tend to be more enterprising, meaning they bring greater economic value to their community.[2]

Another example is behaviour that reduces pollution that imposes a negative effect on society. Assume a government wants to reduce the dependence of their country on fossil fuels, the government might give a subsidy to homeowners who buy solar panels for their house to reduce the amount of electricity they draw from the grid that is powered by coal.[3]

If the government offers a 20% subsidy on residential solar systems and the cost of installing a system of panels that can power the house is $20,000 then the cost to the homeowner will be $16,000. The subsidy both encourages the consumer to buy the cheaper product and encourages the seller to continue producing and selling the product as they still receive the full price of the product. In short, a consumer subsidy increases demand and lowers price for the consumer.

Effect of a Consumer Subsidy on the Market for Solar Panels 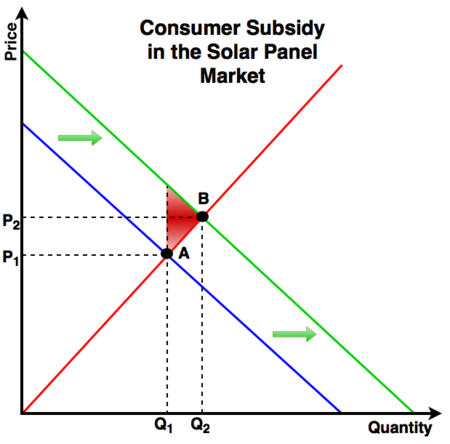 Figure 1. The effect of a consumer subsidy in the market for solar planes, which increases demand and lowers the price the consumer pays while maintaining producer reveneue.[4]