A pigouvian tax or sin tax is a tax levied on actions that have negative effects on others who are not directly involved, a pigouvian tax is essentially a tax on behavior. The tax increases the cost of the action in order to make consumers less likely to act in that way. The harmful effects of these actions are called negative externalities, the harm they impose on others is called an external cost which the tax offsets.[1] This is closely related to the idea of a pigouvian subsidy.

Taxes placed on behaviour with external costs can produce revenue used to lessen the harms caused. Excessive alcohol and smoking can create a burden on a healthcare system. Taxes levied on these products can be used to improve the healthcare system and compensate for the additional burden.[3]

Just as taxes levied on alcohol and cigarettes can correct the negative externality created by them, a tax on carbon can allow a government to invest in new environmentally friendly energy alternatives such as wind power, nuclear energy, solar power and others. In addition to creating new investment opportunities, a tax on carbon will reduce consumption as some consumers will be unwilling to purchase or produce electricity at the higher price or higher production cost.[4] See Carbon tax for more information.

The idea behind a pigouvian tax follows a fundamental condition of the market, as the price rises, demand falls.

Effect of a Pigouvian Tax 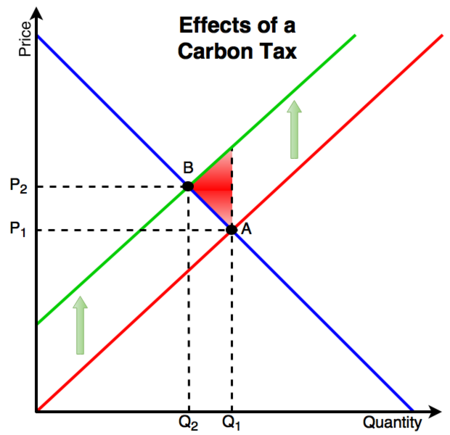 Figure 1. The implementation of a carbon tax will raise the price of electricity and reduce the demand, in effect both reducing pollution and generating government revenue for investment in new technologies and energy alternatives.[5]

An obstacle must be overcome when deciding the proper amount of tax to apply to an activity. Before a government issues a tax, it must determine the level of the external cost it imposes. It is easier to asses some costs than it is others. For example, the cost of performing a lung replacement for a long time smoker is relatively similar across healthcare systems whereas assessing the true cost of pollution in an environment can be very difficult.[6] The problem of incomplete information means that the true size of a tax cannot be determined.[7] This creates a lag on the legislation of a carbon tax which delays the process of mitigation and remediation of damage caused by pollution.