Prevailing winds are winds that blow consistently in a given direction over a particular region on Earth.[1] Due to factors such as uneven heating from the Sun and the Earth's rotation, these winds vary at different latitudes on Earth. Prevailing winds are important for determining locations of wind farms in order to generate electricity.[2]

Prevailing winds also determine the amount of rainfall that different regions get. In Southeastern Asia, these winds result in the formation of monsoons and deserts. The West coast of South and North America receives abundant rain during the winter due to these winds.

The equator receives the most direct sunlight, resulting in the planet's warmest temperatures being near the equator. As seen in Figure 1, heat expands the air, making it less dense which leads to rising air. As the air rises, it cools, making the air lose its water vapour as rain. This air then circulates around to roughly 30 degrees north or south. The wind doesn't flow directly up, because the Earth rotates. This rotation causes the wind to have a higher speed in the Eastern direction relative to the ground at high latitudes (see Coriolis effect), which results in a variety of prevailing winds. 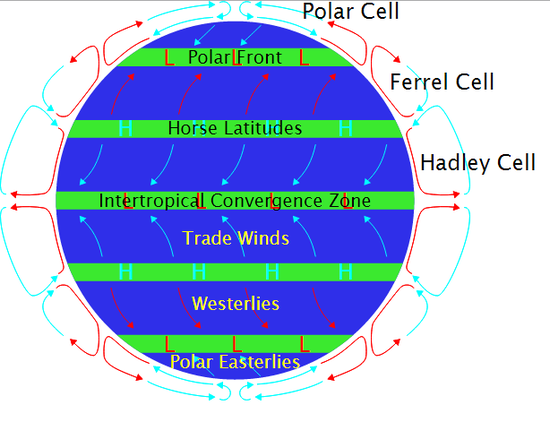 Figure 1. Prevailing winds and their corresponding cells. Refer to text below for more information.[3]

The trade winds seen in Figure 1 are created by hot air flowing up and away from the equator, where it gradually cools until it gets to latitudes of about 30 degrees. It then sinks down towards the surface and flows back towards the low-pressure zone at the equator. These flows are known as Hadley cells, named after George Hadley who first described them in 1753.[4] They are responsible for the dry weather patterns at the 30 degree latitudes, where the majority of the Earth's deserts lie.

Not all of the air moves back towards the equator though. When the air reaches approximately 60 degrees latitude (North or South), it meets cold air from the poles. These winds are known as the Westerlies. At this point, the warm air rises and most of it flows back towards the 30 degree latitude mark. This creates the Ferrel cells of Figure 1.[4]

The final regions are at the poles, from 60 degrees latitude to 90 degrees latitude. This wind cools towards the poles and sinks to the surface, and recirculates. This creates what is known as the Polar Hadley cell or Polar cell.[4]

The video from Keith Meldahl[5] below illustrates each of the described winds, along with a visualization of each.