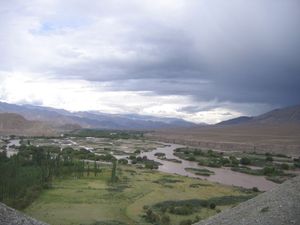 Figure 1. Clouds over India during a monsoon season.[1]

A monsoon is a seasonal reversal in both the prevailing winds and associated precipitation over a region, caused by a difference in heating between a large land mass and the adjacent ocean.[2] Monsoon rains occur over tropical and subtropical regions, most commonly in areas near the Indian Ocean. Monsoons cause regions to experience intense wet and dry seasons, effectively driving these region's climate.[3]

There are two primary monsoons, the well-known summer monsoon and the less powerful winter monsoon. These monsoons affect India and Southeast Asia most dominantly, but also extend down to Australia and up to the Pacific coast of Russia. North America also experiences a yearly monsoon when moist air from the Gulf of California meets air from the Gulf of Mexico, which introduces uncommon rain into normally dry regions.[3] 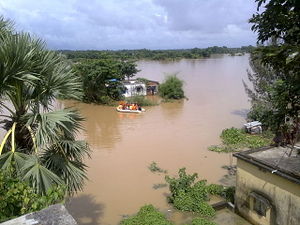 Summer monsoons are associated with heavy rainfall.[3] As winter ends, warm winds from the southwestern Indian Ocean flow up towards Southern Asia bringing with it humid climate and intense rainfall. This hot air is caused by the intense radiant heat received from the Sun during its solar maximum in late spring which results in uneven heating of the Earth, and therefore increased winds.[5]

These regions rely on the rainfall produced by monsoons for various reasons. Most of these countries thrive agriculturally due to their location and the rain provides their crops with water. Also, a great deal of electricity in these regions is generated by use of hydroelectric facilities which rely on adequate rainfall to spin their turbines.[3]

The rainfall from the summer monsoon can vary rapidly, and thus may result in drastic impacts to the region (see figure 2). Too much rainfall is known to cause devastating floods, while too little negatively impacts agricultural output that these tropical countries depend on.[5] Most of these regions do not have large irrigation systems or underground sources of water in aquifers. Therefore they rely on this rainfall to fill their aquifers and provide water to their crops.[3]

The variance of monsoons are already quite drastic, and are only expected to fluctuate even more so as climate change effects become more prominent. Floods and droughts are of common occurrence in India and neighbouring regions. In 2002, India experienced 50% less rainfall than expected, resulting in reduced agricultural outputs and a decline in GDP.[5] In contrast, in 2005 a strong monsoon devastated India with floods and killed over 1000 people.[3]

Global warming may already be increasing this variability, but models show that in the coming decades this variability will increase because of climate change. More moisture can be held in the atmosphere with higher temperatures, this will result in heavier rainfalls when they do occur.[5] Simulations of future climate models over Southeastern Asia suggest increased average rainfalls, generally in the range of 5-10%. Such an increase could result in significant impacts to food production, financial stability, and civilian safety.[5]

The video below is a lecture from Prof. David Archer, Department of Geophysical Sciences at the University of Chicago,[6] talking about how clouds affect the Earth's climate: