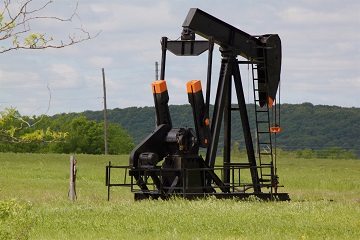 A pump jack is a device used in the petroleum industry to extract crude oil from a oil well where there is not high enough pressure in the well to force the oil to the surface. These pump jacks physically extract the oil for use.[2] Pump jacks and oil derricks are commonly confused, but are not the same.

These devices are composed of a long, heavy beam that is moved by some external power source. This source causes the end of the beam to rise and fall. At the end of this heavy beam are a series of rods known as sucker rods. As the beam rises and falls, the series of sucker rods dips into and out of the well. These rods are connected to a sucker rod pump, which is installed near the bottom of the well. As the system moves up and rod, the sucker rod pump works somewhat like a piston - increasing pressure within the well - and lifts the oil from the reservoir to the surface.[3] The other end of the beam is connected to a pulley system which provides the continuous movement of the pump jack.[2]

These pump jacks pump around twenty times a minute while extracting oil.[3] In large oil fields, pump jacks are strung together along a single power connection that accesses one source of energy.[2]