An oil well is a hole dug into the Earth that serves the purpose of bringing oil or other hydrocarbons - such as natural gas - to the surface. Oil wells almost always produce some natural gas and frequently bring water up with the other petroleum products.[1]

There are numerous different ways that oil well can be drilled to maximize the output of the well while minimizing other costs. The most common type of well drilled today is known as a conventional well. These wells are wells drilled in the traditional sense in that a location is chosen above the reservoir and the well is drilled vertically downward. Additionally, wells with a small amount of deviation in their path from the vertical are also considered to be conventional. This slight turning of the well is obtained during drilling by using a type of steerable device that shifts the direction the well is being dug. These wells are the most common and are fairly inexpensive to drill.[2]

Horizontal wells are an alternative type of well used when conventional wells do not yield enough fuel. These wells are drilled and steered to enter a deposit nearly horizontally. These wells can hit targets and stimulate reservoirs in ways that a vertical well cannot.[3] Combined with hydraulic fracturing previously unproductive rocks can be used as sources for natural gas. Examples of these types of deposits include formations that contain shale gas or tight gas.[4]

Other types of wells include offshore wells, which are wells that are drilled in the water instead of onshore. These provide access to previous inaccessible oil deposits. Multilateral wells are wells used occasionally that have several branches off of the main borehole that drain a separate part of the reservoir.[2]

To drill a well, a specialized piece of equipment known as a drilling rig bores a hole through many layers of dirt and rock until it reaches the oil and gas reservoir where the oil is held. The size of the borehole differs from well to well, but is generally around 12.5 to 90 centimeters wide.[5] To cut through this rock, the drill is pushed down by the weight of the piping above it. This piping is used to pump a thick fluid known as mud into the well. This mud assists in the drilling process by maintaining the pressure below ground in the well as well as by collecting debris created from the drilling and bringing it up to the surface. As the drill digs deeper sections of piping are attached to lengthen the well.[5] 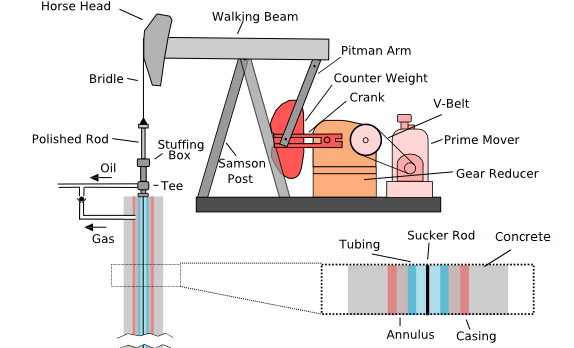 Figure 1. Diagram of an oil well showing how it connects to a pump jack.[6]

After the well is drilled it is completed and cased. The well casing is the lining that is inserted between the edge of the well and the well itself that helps to structurally support the well. In a closed hole well, concrete is poured into the space between the pipe and the borehole for stability and to prevent groundwater contamination from seepage. Once casing is complete, the top of the well is fixed with a production tree - a set of valves that controls the flow of oil out of the well and the pressure within the well.[5]