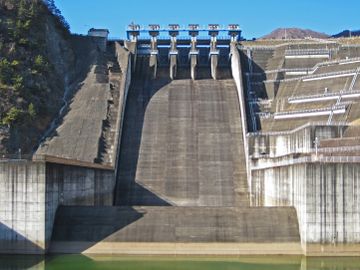 A spillway is a structure constructed in a hydroelectric dam to provide a safe path for floodwaters to escape to some downstream area. Generally, the area that the spillway is released to is the river on which the hydroelectric dam was constructed.[2] These spillways are an important functional part of a hydroelectric facility. If there is too much water going through the dam, elements like the turbines cannot function properly and can be damaged. Spillways protect these other parts from damage or complications.

Spillways can be either controlled or uncontrolled, and they function differently depending on their type. Controlled spillways are equipped with gates that can be raised or lowered. Uncontrolled spillways do not have this gate. Regardless of what specific type of spillway is used, they generally consist of a control structure to hold back water, a channel for water to flow through, and a terminal structure.

This type of spillway has a small crest that water must flow over. After moving over this crest, the water is moved down through a chute or trough to the downstream side of the river. This type of spillway can be close to the dam, or some distance away where conditions are better.[2]

These spillways are located upstream and to the side of the dam. After flowing over a control crest, water enters a side channel and is carried to the downstream side of the dam by a chute. Occasionally tunnels are used instead of a chute.[2]

When a dam is overflowing, water moves into a spill-over area. In this area there is a hole in the bottom of the holding container, allowing water to fall into the opening on all sides. This then drains the water in an uncontrolled manner.[2]