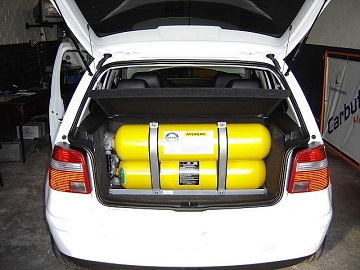 Compressed natural gas or CNG is simply natural gas mainly comprised of methane that is stored under high pressures (while remaining in its gaseous form), mainly as a means to transport it, or as storage for later use as vehicle fuel. In this form it remains clear, odourless, and non-corrosive.[2] CNG is used widely as an alternative fuel for vehicles as it has a fairly high octane rating. CNG is not to be confused with liquefied natural gas, which has been turned into a liquid—and must be at very low temperatures. Although it's still in its gaseous form, compressed natural gas is under more pressure and thus takes up a smaller volume than ordinary natural gas (but more volume than LNG).

After being extracted from wells and treated, the gas travels through pipelines to a distributor. These distributors then send this fuel out to customers in pressurized tanks or sent out to fueling stations.[2] At smaller fueling stations and in vehicles, the compressed gas is stored in thick-walled tanks made of aluminum, steel, or some composite.[2] These high pressure tanks are kept at pressures around 20-25 MPa, 200-250 bar, or 3000-3600 psi.[3] This high pressure reduces the volume of the natural gas to less than 1% of its volume at standard atmospheric pressure.[4]

Use as an Alternative Fuel

CNG can be used as a gasoline alternative in a number of different vehicles and many commercial vehicles have recently become CNG fueled. Vehicles of any size from sedans to heavy-duty transit vehicles like buses and street sweepers can be fueled by CNG.[2] Currently, natural gas powers more than 12 million vehicles on the road with about 250,000 of these located in the United States.[4]

There are several benefits to using natural gas as an alternative fuel for transportation. For example, 99% of the natural gas the US produces comes from somewhere in North America. Moving to CNG would reduce their reliance on oil from overseas.[2] It burns more cleanly than gasoline or diesel fuel—showing an average reduction in emissions of 80% as compared to gasoline vehicles.[2] Additionally, current estimates say that compressed natural gas costs about 40% less than gasoline.[2]

Natural gas is flammable, however a leak is not always extraordinarily dangerous. Because natural gas is lighter than air, it quickly dissipates when it leaks out of a tank and it is only flammable when the air/natural gas mixture is 5-15% natural gas.[2] Additionally, a sulfur-based mercaptan—an odourant—is added to make leaks more simple to detect.[3] This narrow flammability range makes it a safe fuel to use, but strict safety standards exist to make CNG powered vehicles as safe as those powered by gasoline.[4] There are some safety concerns with large buses fueled by CNG compared to diesel buses. One of these is a longer breaking distance due to the added weight of the fuel storage system. Finally, the composition of natural gas itself can be an issue. CNG is mainly methane —a greenhouse gas—which could contribute to climate change if a leak existed.