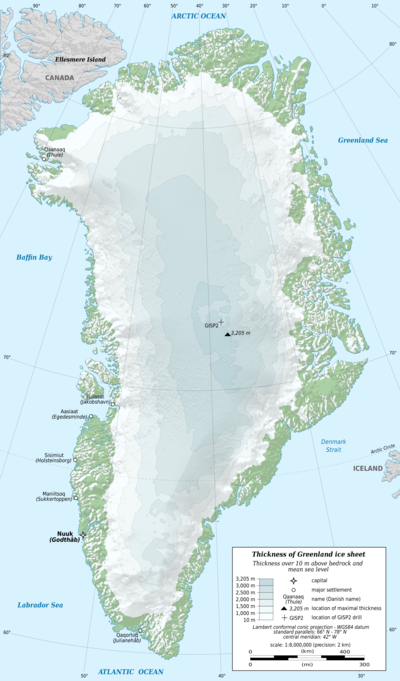 Greenland ice sheets caused the land under them to sink; mainly the ice has depressed the central area of Greenland.[3] If the continental glaciers were to abruptly disappear, the landscape in Greenland would change drastically. Greenland, the largest island in the world, would become an archipelago, which is a chain of small islands only connected by waterways.[3]

Melting ice sheets contribute to rising sea levels. As ice sheets in Greenland melt, they raise the level of the ocean, putting coastal habitats at risk of being flooded. Melting ice sheets also reduce the ocean’s salinity. Tons of fresh water is added to the ocean every day by melting ice sheets. Large additions of freshwater change the ocean ecosystems. Organisms, such as coral, depend on saltwater for survival. Some corals can’t adjust to a higher freshwater concentration habitat. Thermohaline circulation, the ‘ocean conveyor belt’, would be radically altered by melting ice sheets. This circulation regulates nutrient rich water from polar regions throughout the world's oceans in a long, slow loop. Circulation is dependant on the relationship between water with different densities. Melting ice sheets would increase the amount of warm and freshwater in polar marine ecosystems.[3] This would slow ‘deep water formation’, the development of cold, saline, nutrient rich water on which entire marine ecosystems depend.[3] According to the United Nations, sea ice may decrease by 25% within the next century.[2]