Not in my back yard syndrome 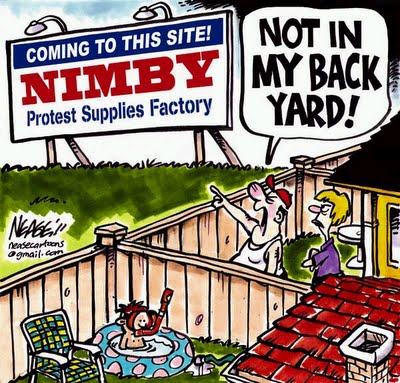 NIMBY (also NIMBYism, NIMBY syndrome) is an acronym for "Not In My Back Yard".[2] The term describes people who act in their own interests to oppose nearby development of a technology or service from which they benefit and would otherwise support (this is related to NIMTOO - not in my term of office, NIMEY - not in my election year, and NOPE - not on planet Earth). Often, opposition to new developments is unusually high from those who live nearest the proposed location. The NIMBY concept attempts to explain this phenomenon of low public acceptance to new development. Power plants and utilities are among the most affected, ranking 4th in a United States survey behind landfills, casinos, and quarries as the most unwanted project types in citizens' hometowns[3].

Developers sometimes use this term in a pejorative way to dismiss the concerns of those opposed to a project. For this reason, some academics have spoken out against using the word, stating that the NIMBY label oversimplifies a complex issue [4] [5]. While self-centered attitudes may play some role in local opposition to development, concerns may also arise over the planning process or other details of a project[6]. Existing opposition to controversial technologies (e.g. nuclear or coal power) may also be stirred up by the threat of local development.

Regardless of the reasons behind NIMBY attitudes, research shows that they are indeed held among some members of the Canadian public. In a 2007 poll, 15% of Ontario residents said: "I support nuclear-producted electricity, but only if the plant is not located in my province[7]." This opposition to local development despite general, abstract support for an idea is a clear example of so-called NIMBY attitudes in effect.

Even energy sources with strong general support are subject to local opposition. Wind power enjoys 85% national support in Canada overall[8], but wind turbine development is often unpopular with locals. Research has shown that NIMBY attitudes are primarily present during the planning stages of a project. In a 1994 survey, only 40% of UK residents near proposed wind farm sites supported the projects themselves, although 70% supported wind power development in general. The projects gained greater acceptance after they were completed, however, with 66% of residents showing support in a post-development survey[9].

NIMBY and the energy industry

The following table lists some examples of energy-related development projects which have experienced local opposition.