Turbine-based AC electrical generation is when an electric current is induced by the interaction between charged particles and magnetic fields which converts the kinetic energy of the turbine into the kinetic energy of electrons. This is where a high energy society gets most of its electricity from. According to the law of conservation of energy, generators do not create energy. Rather, they convert a different form of energy into electrical energy. This form of electrical generation is used with all sources of energy that use the movement of a turbine. Examples of these include hydropower, fossil fuel-based power, nuclear energy, and solar thermal power plants, among others. Almost all major power plants generate alternating current, as do diesel generators.

Figure 1. An animation of a PhET simulation[1] showing how a changing magnetic field on a looped conductor induces the movement of electrons

Faraday's Law states that a changing magnetic flux on a looped conductor will produce a magnetic force that causes the electrons in the conductor to move, creating a current. This is known as electromagnetic induction, and it is the fundamental principle underlying many generators. The magnetic force applied to the electrons creates a voltage in the conductor that is known as an electromotive force. The strength and direction of the electromotive force is determined by the strength and direction of the magnetic field and the velocity of either the magnet or the conductor[2]. Electric motors work in the exact opposite way—electric current in a magnetic field creates motion.

See Figure 1 to see this theory in practice. 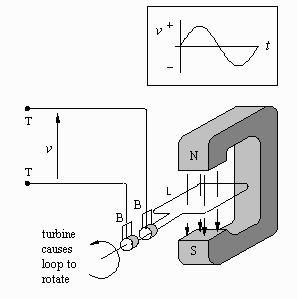 Electric current is generated when a rotating loop of wire, known as an armature, is placed in a uniform magnetic field, or when a stationary armature is placed in a rotating magnetic field. In the first case, as the armature rotates, one half of the loop will always be moving in the opposite direction of the other half of the loop. This causes an electromotive force in opposite directions for both halves of the armature, which add together to allow a current to flow through the loop (see Figure 1)[4]. The same result can be achieved with a rotating magnet around a stationary armature. This generation of current is entirely dependent on the armature or magnet rotating, and this rotation is powered by turbines, which rotate due to one of the sources of energy listed above. For more information, visit hyperphysics.

The University of Colorado has graciously allowed us to use the following Phet simulation. This simulation[1] illustrates how a simplified AC generator could work, with a water turbine rotating a magnet that induces an alternating current in the stationary armature. 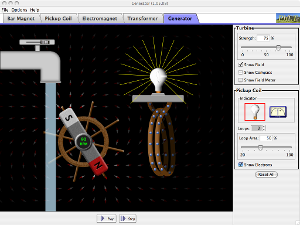