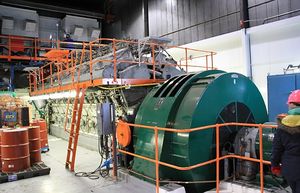 Diesel generators are used in many versatile applications around the globe. Typically they are set up in rural places where they are connected to a power grid and can be used as the main power source or for a backup system. Diesel generators can also be used to offset the peaking power needs on the grid because they can quickly be turned on and off without inducing any lag time. Generators used in residential settings can range anywhere from 8 to 30 kW while generators used for commercial settings can range anywhere from 8 KW to 2,000 KW. Large ships also utilize diesel generators for auxiliary power purposes, which can range from lights, fans and switches to supplementing power to the propulsion system.

Burning diesel or other fuels creates exhaust gasses. Diesel generators produce carbon dioxide (CO2), nitrogen oxide (NOx), and particulate matter. These generators release this into the atmosphere and substantially reduce air quality in the nearby regions. Every litre of fuel has 0.73 kg of pure carbon, 2.6 kg of carbon dioxide released per liter of diesel fuel.