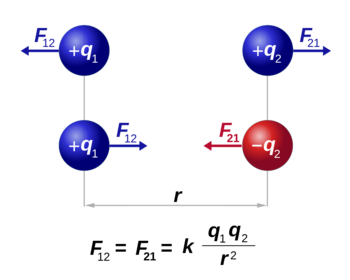 Like charges have a force that pushes them further apart, unlike particles are atractive.[1]

Coulomb's law states that "like charges repel, and unlike charges attract," but the more complete form determines the strength of the Coulomb force; Coulomb's law shows how strong the push or pull (the force) is between two points of charge, like a proton and electron in an atom. Coulomb's law is the simplest case of the electromagnetic force, one of the four fundamental forces. Most everyday forces like friction, the normal force, and air drag are residual forms of the Coulomb force (all of the charges add up to a complicated situation that leaves the friction between two surfaces, for example). Mathematically, Coulomb's law is very similar to Newton's law of gravity:

The law states that the electric force of one charge on another depends on the magnitude of the charges, and the square of the distance r between them.

To learn more about the Coulomb force and Coulomb's law please see hyperphysics.