Global climate models (also referred to as general circulation models, both abbreviated as GCM) are climate models that take into account the physical processes in the atmosphere, ocean, cryosphere and land surfaces.[1] As a result, they are the most advanced tools available for simulating the response of the climate system to increasing greenhouse gas concentrations.[2]

GCMs represent the global climate using a 3-dimensional grid over the globe, typically having a horizontal resolution between 250 and 600 km, 10 to 20 vertical layers in the atmosphere, and up to 30 layers in the ocean. This resolution is relatively coarse, resulting in the need for averaging of properties in a technique known as parameterization, which introduces a source of uncertainty into the model.[2] In order to deal with uncertainty, GCMs may simulate quite different responses to different climate forcings. 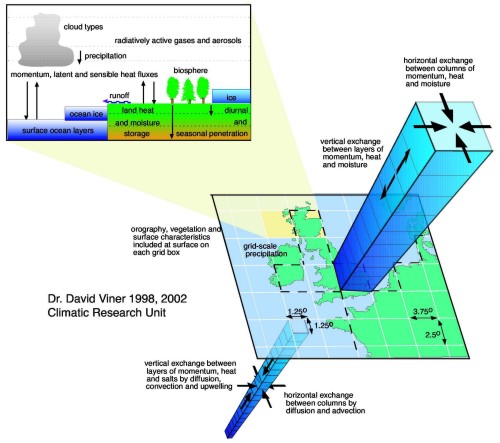 Figure 1. Example of a 3D grid used in global climate models. Calculations keep track of energy flows between gridcells, along with mass and momentum transfer, moisture, temperature, and other parameters.[2]