Growing algae is important as algae are used as a food supplement, a biofuel resource, a chemical resource, and a waste management system. The growth of algae generally takes place in one of three different forms: 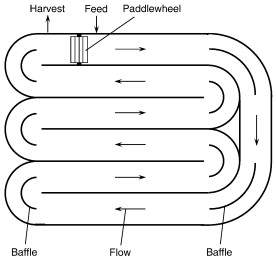 A raceway pond (Figure 1) grows algae as it moves along a water channel circuit that is usually about 30 cm deep. The base of the winding channel is usually constructed out of compacted dirt and/or cement and lined with a white reflective material (usually plastic). Flow through the channel is provided by a paddle-wheel that is located between the extractor of mature algae and the feeder of new algae, while the flow is directed around the bends by baffles, as shown in the figure below.[1] Raceway ponds are desirable for their large scalability and low set-up costs but experience significant water loss through evaporation. The raceway pond also experiences temperature fluctuations and carbon dioxide losses to the surrounding environment. Productivity is affected by contamination with unwanted algae types and microorganisms that feed on algae. The concentration of algae can remain low due to raceways being poorly mixed.

A tubular bioreactor (Figure 2) grows algae in an array of clear plastic or glass tubes that have CO2 constantly fed through the closed system along with the necessary nutrients, such as nitrogen, phosphorus, and iron.[2] The tubes are generally less than 10cm in diameter to allow for light to penetrate to all of the algae. The array of tubes is arranged horizontally, vertically, or on a slant but always oriented running north to south. This arrangement allows for the semi-continuous growth of algae, as the fresh algae culture is being fed into the bioreactor at the same rate at which the mature algae is being drawn out. Algae production is stopped periodically in order to clean the tubes.[1] The recycled growth medium and fresh young culture in a new medium are degassed to remove the oxygen and bubbles from the new culture before being fed into the tubular bioreactor. Excess oxygen needs to be removed from the system because oxygen concentrations above 4 times that of air will prevent algae growth.[3] The feeding of CO2 and other inorganic supplements mentioned above happens at the entrance to the tubes and at locations along the length of the tube as required. Testing sites are necessary along the length of the tubular bioreactor to control the pH and inorganic salt concentrations at different stages of the algae growth. The best photosynthetic conversion rates are achieved at tubular diameters of 2-5 cm.[4] 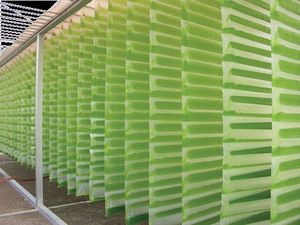 A vertical bag system (Figure 3) grows algae in an aqueous solution within a closed bag usually 2-4 cm thick for optimum photosynthetic efficiency.[4] The CO2 and other inorganic nutrients are fed through the system from the top, bottom, or sides of the bag and bubbled through the algae. Exhaust gases rich in oxygen are siphoned off of the top of the vertical bags to reduce the oxygen in the growth medium, as too much oxygen inhibits algae growth.[3] The vertical bag system was derived from the tubular bioreactor system in order to reduce material start-up costs and allow for easier modification of the system (adding and removing testing and feeding points is much easier with a vertical bag).

The vertical bag system is very good for a laboratory setting because algal batches of any size can be made with it. Lab trials have found that the bags needed to be replaced every 60-90 days as contaminants build up in the system and prevent effective algae growth.[6]