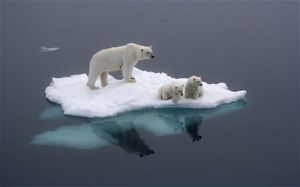 Figure 1: Mother polar bear and her cubs adrift on a piece of sea ice. As temperatures are rising, arctic ice is melting forcing these animals to change their feeding patters and their habitats.[1]

Climate change, both natural or anthropogenic, has a major implication on ecosystems. This includes changing where species (both plant and animal) can live. Due to rising temperatures, changes in land use for agriculture, deforestation and other changes to the environment, many species are forced to adapt to the new climate by changing their habitat and migration patterns.[2]

Cause for Habitat Change

There are many reasons as to why a specific species may have to change and adapt to a new habitat. Global warming, drought, floods, deforestation and land use changes are amongst the leading factors. Different species require different temperatures and altitudes to survive. For example with land species, rising temperatures cause species that favour cooler climates to begin move north. In areas where temperatures are cooling, species that prefer warmer temperatures need to adapt to a different climate as well. This can have implications depending on the species as this new range and can remove vital predators or prey that are crucial to maintaining the food chain in that area. Similarly with aquatic species, as sea levels rise, freshwater and salt water systems may start mixing thus relocating many organisms.[3]

In North America, many animals are already showing signs of habitat range change. Some of which include the polar bear, the pika, waterfowl and many other avian species.[4][2]

Figure 2. The map above shows a snapshot of the Conservancy animated map. The lines shows how species are changing where they live with time, in this case largely northward.