From Energy Education
Jump to navigation Jump to search 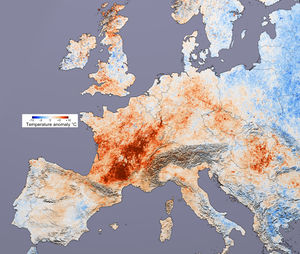 Figure 1. A heat wave in Europe in 2003. Regions experienced temperatures over 10°C hotter than average, and the death toll was around 70,000.[1] (click to enlarge)

A heat wave is a period of unusually hot weather, typically lasting two or more days. To qualify as a heat wave, the recorded temperatures must be above the average temperatures for a given area; 30°C in Las Vegas during Spring is fairly normal, but 30°C in Toronto during Spring is quite hot. The World Health Organization estimates that the number of people exposed to heat waves increased by 125 million people between 2000 and 2016.[2]

Heat waves can be quite dangerous, especially when the public is not prepared. For example, in July 2012 over 8000 temperature records were broken in the United States, and many deaths were attributed to the heat waves.[3] As discussed in Figure 1, the 2003 heat wave in Europe killed approximately 70,000 people. In 2010 40,000 people in the Russian Federation were killed by a heatwave.[2]

What causes a heat wave?

Heat waves are the result of trapped air. Normally air circles the globe in large prevailing winds, however if it is trapped over one region it is allowed to warm to uncharacteristic temperatures due to sunlight.

The air is often trapped due to high-pressure systems. These systems force the air downwards, in effect acting as a large cap. With the air being trapped, it is unable to rise into the cooler upper atmosphere, therefore preventing precipitation.[3]

It is important to drink lots of water during a heatwave, and to wear appropriate clothing. Never stay in a car for an extended period of time, unless it has a working air conditioner. Also avoid getting too much sun, as sunburns make it harder for people to cool off.[3] Heat waves are particularly hazardous for more vulnerable people in the population, see figure 2.

Figure 2. Vulnerable populations are more at risk during heat waves.[2]

Since heatwaves are not attributed to the same danger level as tornadoes, hurricanes or cyclones, many underestimate their effects. This lack of caution exacerbates the problem, especially with people who are already vulnerable with pre-existing conditions.[4]

Global climate change is very likely to cause both increased frequencies and intensities of heat waves.[4][5] For much of the world, summers are expected to be warmer, and winters milder. Natural variability plays an important role in extreme weather and climate change has effected natural limits, making heat waves more frequent and more intense. NOAA’s National Climatic Data Center reported from January 1 to June 18 of 2012 new high temperature records, which outnumbered cold records across the United States by nearly 10:1.[6] This ratio illustrates how unusual 2012 was and how these types of extremes are becoming more likely. Climate change shifts the curve to the hotter side, moving the average over. In addition, climate change flattens the curve, which provides for a greater spread of events and an increase in variability. The combination provides for an increase in record hot weather.

This is problematic not only because of the known effects of global warming, but from a mere mortality viewpoint. Mortality rates already increase with the heat waves experienced commonly, and will only increase further as heat waves get more intense. Some studies say, however, that the milder winters will reduce mortality rates during winter, resulting in a balance or even a reduction of total deaths.[5]