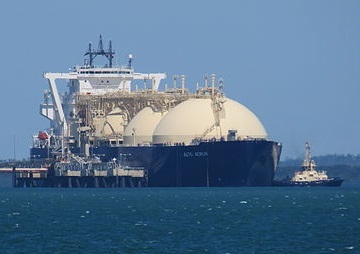 Since the gas is transported in its liquid form and because of their physical properties, they are transported either at pressures much greater than atmospheric pressures, at very low temperatures, or some combination of the two. Therefore, the ships can be classified as:[3]

In addition, gas carriers can be categorized based on the hazard level of the material being transported:[3]

LNG carriers are built using a double hulled construction, with four or five large tanks to hold the liquefied gas. These tanks are generally composed of several layers of material to prevent leaks and keep the LNG at the cold temperature necessary to keep it in its liquid form.[2] These tanks are also heavily insulated, minimizing the amount of LNG that boils off or evaporates during the transportation of the gas. Some vessels actually utilize this "boil off" to fuel the vessel itself. The tanks themselves are generally made of aluminum or 9% nickel steel.[4]

The materials used for the hull of the ship are designed to accommodate a wide range of temperatures. However, if the material in the hull gets too cold it will become brittle, thus it is important that the tanks (at temperatures of -160°C) are insulated sufficiently to protect the hull from the harmful effects of these temperatures.[5] The double hulled construction helps with this, as the insulated tanks are located within the inner hull. There is a space between the inner and outer hull to reduce the transfer of heat and protect cargo tanks in the event of some emergency. The cargo tanks are separated from each other and other components of the ship by dry compartments.[5] 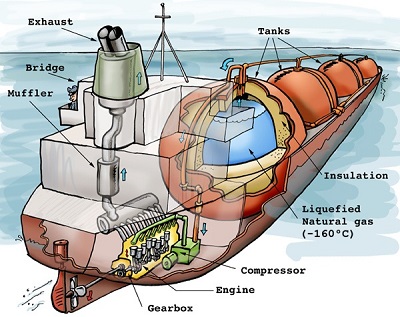 In addition to these ships being advanced in the way that they hold the LNG, they are also equipped with advanced gas and fire detection and suppression systems to ensure that even a small leak would trigger a response.[2] This makes a catastrophic fire on a LNG carrier extraordinarily unlikely.