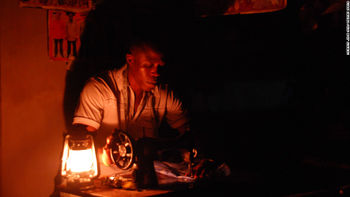 Figure 1. A man sewing in a room lit by a kerosene lantern.[1] 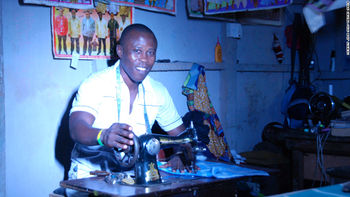 Figure 2. The same room as figure 1, but lit by an LED light bulb hooked to a solar panel.[1]

Leapfrogging is the ability of a developing or less developed country to essentially "skip" less efficient and higher carbon-intensive technologies during the course of their development. The decreasing cost of high efficiency, low-carbon technologies makes leapfrogging increasingly possible and allows for development and environmental awareness to coincide.[2]

Making relatively low cost energy available to people in developing countries has a positive effect on the lives to the people and society as a whole. The introduction of technologies such as electric cooking platforms powered by solar energy means that the cost of running the home falls, as the price for solar energy is very low (depending on if it is from the grid or from a home unit) whereas the price of kerosene and other fuels used for the same purpose can be up to $10 per kWh in Africa.[3] the ability to cook with electricity instead of fossil fuels also has a positive impact of the health of a family but particularly women and children as they spend the most time in the home. Using electricity rather than fuel to cook eliminates the harm caused by the by-products of combustion of both liquid fuels such as kerosene and solid fuels such as charcoal. Figures 1 and 2 show how much of a difference moving from kerosene lanterns to LED light bulbs makes. Read more about this at the access to electricity and access to non-solid fuel pages.

While sources of energy such as hydropower could be utilized to great effect in a number for developing countries, the building of dams for hydropower is very capital intensive and relies heavily on the existing grid and infrastructure which are often dated and inefficient. For countries that are unable to secure the capital needed for these projects, the use of technologies such as photovoltaics can eliminate the cost of building a dam and can be easily scaled to fit the energy consumption of an area, be it a house, a village or a city.

Another good example of leapfrogging is the effect of mobile phones in developing countries. Figures 3 and 4 show that many countries in the world have at least 100 cell phones per 100 people. While this technology still requires some infrastructure such as cellular towers, the overall amount is much less than what would be needed for a traditional land-line telephone system. The use of mobile phones means that the government does not need to spend money developing the infrastructure for land-lines and can focus on other development goals.[4] Furthermore, as the price of mobile phone technology drops the effects are more positive.

Developing countries are implementing renewable energy sources at higher rate than OECD countries and this energy is competitive in terms of cost and is also much less harmful to the environment.[5]