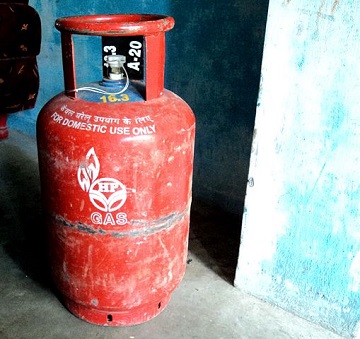 Liquefied petroleum gas or LPG is a type of hydrocarbon gas that is obtained by refining crude oil or processing natural gas. This gas is composed of either propane and butane by themselves or as a mixture of the two.[2] In addition to its use as a fuel for cooking and heating, LPG is also important for use in manufacturing applications, as a fuel for cars, and it can be used to power cogeneration plants.[3]

Liquefied petroleum gas is produced during the refining process of crude oil or extracted during the processing of natural gas. The gases produced in this process are mainly propane and butane with small amounts of other gases. These gases are liquefied through pressurization to make them easier to transport and store.[2]

To liquefy the fuel, gases are stored in sturdy tanks and held at high pressures—about 20 times atmospheric pressure. These tanks have additional safety features because of this extreme pressurization, mainly a built-in shutoff valve to seal the tank if there are leaks and an extra-sturdy design.[4] Since LPG generally has no odour, small amounts of ethanethiol (a foul smelling mercaptan, a type of odorant) are added to help people smell dangerous gas leaks.

LPG has a high caloric value, meaning that it is a good energy source as it provides a high level of heat. It is also a valuable fuel as it has almost no sulfur content, which results in cleaner burning.[5] About half of the LPG used is consumed for heating and cooking and essentially is used in place of natural gas. The remaining 50% of LPG is split more or less equally between use in cars and industrial uses. Overall, LPG provides less than 2% of the total energy people use but it is still a major alternative to gasoline.[5]

When used, LPG is generally delivered by trucks in a large tank and placed outside a home or other building. In addition, reusable gas canisters are available for powering stoves, heaters, and barbecues. Small canisters of LPG are also available for portable hair styling tools.[5]

Two major disadvantages of the use of LPG are safety and cost. The high pressure needed to store LPG results in occasional tank bursts if canisters are not stored properly and maintained. In addition, LPG is highly flammable. However, suppliers take many safety precautions to ensure that LPG is as safe as ordinary natural gas supply. The cost of LPG is several times higher than ordinary natural gas, but LPG might prove to be a good option if access to natural gas is not available.[5]

Use as a Vehicle Fuel 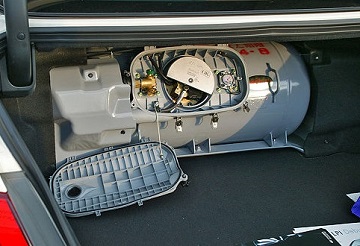 Liquefied petroleum gas can be used as an alternative fuel to power internal combustion engines as it is more cleanly burning than gasoline and can produce lower amounts of some harmful emissions such as carbon dioxide.[7] An estimated 6 million European vehicles run on LPG and there are around 17,500 gasoline stations in Europe supplying this fuel.[5]

One of the major benefits of using LPG as an alternative fuel is that it is usually less expensive than gasoline.[4] Additionally, the careful design and safety features of the tanks make them slightly safer to use than gasoline simply because they have a shut-off valve. This minimizes the risk of an LPG fire if used as a vehicle fuel.[4] LPG can also be used as a fuel without taking away from vehicle performance.[7] The use of LPG also helps with the issue of importing fuels for use from other countries as 90% of LPG used in the US comes from domestic sources.[7]

However, the availability of vehicles that are LPG-fueled is limited. Some existing vehicles can be converted to use this LPG with installations, but involves installing a separate fuel system as the liquid is stored in highly pressurized fuel tanks.[7] In addition, it is harder to find places to refill LPG as it is not as widely used as gasoline or diesel, and fewer miles can be traveled on a single tank of LPG.[7]